Flowering marijuana is when a female marijuana plant starts to produce buds. Although there are both male and female plants, the majority of people will be looking for female flowers, as only females produce the prized buds you eventually smoke.

When is your marijuana plant ready for flowering?

Marijuana doesn’t flower because of size or age; it’s to do with the light cycle the plant is on. When you flower your marijuana plant is entirely up to you. It is recommended that you do not start flowering until the plant has been in vegetative growth for at least 4-5 weeks and has shown pre-flowers. A good time to bring the plant into flower is when it has reached ½ the size you intend it to be as during flowering, a plant will grow 2 – 2 ½ times its vegetative size.

The following guideline gives you an idea what to expect during flowering. This is just a rough guideline as flowering times vary from strain to strain. 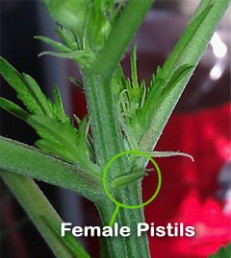 • 1-2 weeks – After switching to 12/12 marijuana light cycle, your marijuana plant will start to show its first flowers. 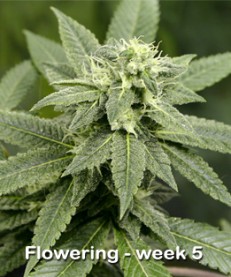 • 3-5 weeks – Plants start to stretch for light and flowers will appear at the nodes. Your plant will start to develop creamy white pistils from its flowering points. New flowers will continue to develop over this period.

• 5+ weeks – The buds start to thicken significantly. Flowers will close and the calyxes will swell. Your leaves will yellow as energy is put into making the flowers. During this time, your plant will reach its flowering peak, with pistils swelling and finally changing in color from white to amber, moving on to a reddish brown.

• Final 2 weeks – For the final 1 to 2 weeks of flowering you will want to flush your plant. This means use nothing but clean water.

• Final 48 hours – You can further flush the nutrients and unwanted sugars from your flowering weed by turning out all light. The plant will utilize the sugars already produced during photosynthesis to continue to swell the budding points.

What are the types of flower?

As a grower or breeder of marijuana, you are able to produce a variety of plants depending on your growing needs or preferences. Plants grown from seed can take on the following forms, depending on the seed genetics.

• Sensimilla – Sensimilla is the term used for marijuana flowering that has NOT been pollinated by a male plant. A sensimilla flower is the most potent, carrying the most THC and is the most prized for commercial cannabis growers.

• Male – A male plant doesn’t produce the buds you smoke, they produce pollen that can be used in seed production. If you wish to grow unfertilized female marijuana plants, a male in the growing environment will pollinate your Sensimilla unless removed.

• Hermaphrodite – Hermaphrodite plants occur through stress during vegetative growth or early flowering. A plant that has been left to flower for too long can also hermaphrodite. Hermaphrodites can still produce smokeable buds, but they lack the potency of a Sensimilla plant. 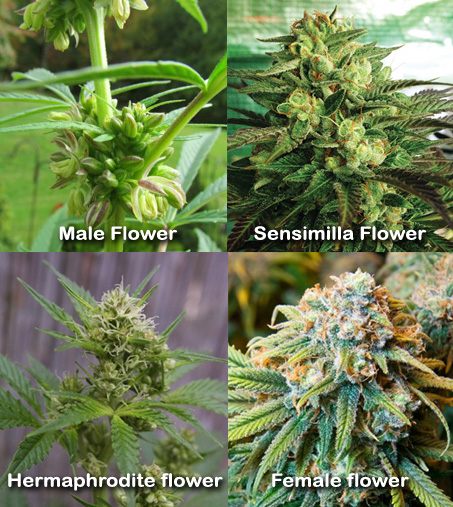 Indoor Growing
To start your plant flowering when growing indoors, you need to mimic the lighting conditions found in Fall/Winter. This means taking the plant from the 18/6 marijuana light cycle used in the vegetative growth stage, and changing it to 12 hours light/ 12 hours darkness. You will also need to reduce the number of lumens you are giving your plant. This means changing your bulbs from a summer sun replicating 6500k, to 2700k which mimics the warm red sun of fall. As marijuana is a fall flowering plant, the shorter light hours and red light reproduce the conditions in nature. Be careful not to make this change before the plant has shown its pre-flowers as this will stress the plant and may cause it to become a hermaphrodite.

In the dark period, it is essential to make sure your grow room is completely light free. Light within the dark period will prolong the amount of time it takes for the plant to flower, reduce its output and put unnecessary stress on the plant.

Outdoors
When grown outdoors, marijuana plants enter the flowering stage when the days start to shorten. This generally means weed plants go into flower in fall as the life cycle of the plant reaches its natural end and the female plants become pollinated. However, left unpollinated, female plants start to vigorously produce THC and resin as the plants energy is used to produce buds instead of seeds. When growing outdoors, nature takes care of your marijuana light cycle and brings your plant into flower naturally.

Nutrients
During marijuana flowering, plants need a different set of nutrients to produce bigger buds which in turn produce a bigger yield. Marijuana flowering nutrients are higher in phosphorous (P). It is linked with resin and seed production. Recommended levels are 5-50-17 (N-P-K), but you can use 15-30-15 or 10-20-10 and still get satisfactory results. Follow the manufacturer’s instructions to avoid nutrient burn and to get the most out of your nutrients.

Most problems associated with marijuana flowering can be found below:

• Mold – Mold is likely to occur when the humidity in the grow room is too high. This can be avoided by measuring humidity and avoiding spraying your plants. 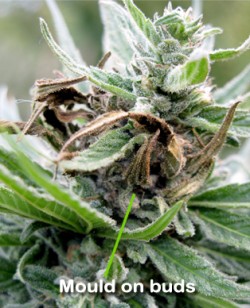 • Pests – Pests normally come from clones and are rare in grows that have been started from seed. 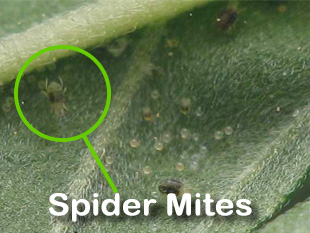 • Hermaphrodite due to stress – This can be caused by light leaks or starting your flowering light cycle before pre-flower. Stress can also be caused through either too much or too little water, as well temperatures being to high or low. Hermaphrodite plants may spoil other plants in your grow room by releasing pollen.

• Light leaks – causes stress on the plant and leads to a slowing down of the flowering process. Also, causes plants to hermaphrodite.

• Over ripe bud – Caused by not harvesting in time. A late harvested plant will not be as potent and will run the risk of becoming a hermaphrodite.

• Male plants in the grow room – Male plants will pollinate your female plants, leading to all the energy that is used to produce resin heavy buds being utilized to produce seeds meaning the plant produces a weaker and smaller yield. The moment you see that you have a male, remove it from you grow space and destroy.

The marijuana flowering stage is one of the most important steps in the growing process. Making sure you put your plants on the right marijuana light cycle will yield the results you want. The guide above provides all the information you need to successfully flower your plants.