The vast majority of growers are looking for unpollinated female marijuana plants as these produce the most potent smokable buds. Marijuana sexing early and correctly helps you to remove any male plants that have the potential to pollinate and destroy your marijuana crop.

In this section you will learn everything you need to know about marijuana sexing, particularly when and how you establish the sex of your marijuana plant, as well as the little things you can do to increase your chances of growing a plant that is the sex you want.

It’s possible to start telling your plant’s sex as early as pre-flowering which occurs between the fourth and sixth week of vegetative growth. Pre-flowers develop where the leaf stems join the main stem (internodes). You quite often find they develop at the fourth or fifth join (internode) down from the top of the main stem. If you’re unsure of your plants sex during this period, you will be able to tell for certain by the second week of flowering .

Grow tip: Many people struggle to tell the difference between male and female marijuana during pre flowering. This is quite common so don’t panic, wait until the 2nd week of flowering when the the sex organs will be more pronounced.

Why is this marijuana sexing important?

Marijuana sexing enables you to establish whether your plant is going to produce the smokable buds of a female marijuana plant, the pollen sacks of a male for breeding, or whether you have a hermaphrodite. If you’re trying to produce the unpollinated female marijuana (sensimilla) buds for smoking, having a male or hermaphrodite in your grow room will pollinate your female plant which will then start producing seeds instead of THC. If you have no interest in breeding your plants destroy both male and hermaphrodite plants immediately as males produce no buds and very little THC and although hermaphrodites do produce buds, they will be full of seeds and lack potency. You can carefully remove your male or hermaphrodite plant (if the plant is only partly hermaphrodite you may wish to keep the plant) from the grow room without endangering females by covering them with a plastic bag. If you want to breed and make seeds , separate your plants with male sex organs until maturity and introduce to a female marijuana plant when ready.

Grow tip: marijuana sexing simply means determining the sex of the plants in your grow area. Generally but not in all cases males are removed as female weed plants are what you smoke.

Difference between Male and Female or Hermaphrodite? 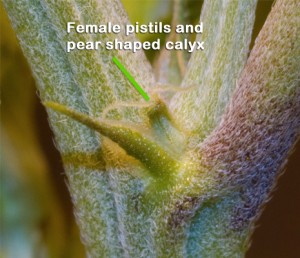 You can identify a female marijuana plant by looking for a pear shaped ball that grows where leaf stems join the main stem. Here the pear shaped ball (calyx) will develop two white hairs (pistils) that will grow out in a “V” shape. It may take a plant until it has been in the full flowering light schedule of 12/12 two weeks before female flowers develop, so be patient. If not you may end up throwing out a plant that was female because it hadn’t shown its white hairs early enough.The main benefit of establishing that you have a female marijuana plant is it produces female weed that gets you high. Keeping a female separate from any male or hermaphrodite plants will mean you grow unpollinated sensimilla, which are the most potent and desirable.

You can encourage the growth of female marijuana plants by using high levels of nitrogen and low levels of potassium, alongside using only blue light and lower temperatures for the first two weeks of vegetative growth. Although they may increase the chances, these techniques cannot guarantee the development of female marijuana as a stressed plant is more likely to grow as a male or hermaphrodite. 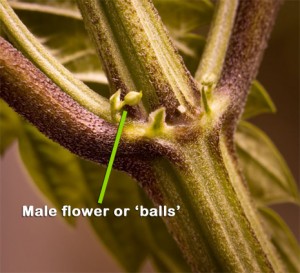 You can identify a male marijuana plant when marijuana sexing by using the pre-flowers that develop where the leaf stems join the main stem (internode). Here they will start to develop what look like little balls and are distinguishable from females by the absence of little white hairs (pistils). A key difference between male and female marijuana plants is that males tend to be taller than females, with more irregular branching and fewer leaves and internodes. It only needs one male to pollinate many females.

The main benefit to establishing a male flower early is that it can be removed from your grow room and destroyed before it has a chance to pollinate your female and ruin your weed. Males tend to be destroyed as they have low levels of THC and smoking them is more likely to give you a headache than get you stoned. You should only keep males if you intend to breed your own seeds.

Male marijuana plants are more likely to occur if you have low levels of nitrogen and high levels of potassium in the first two weeks of vegetative growth. High temperatures along with red light during vegetative growth also increase the chances of your plant growing as a male. Other causes include light leaks, over and under watering and excessive nutrient use early in a plants life. 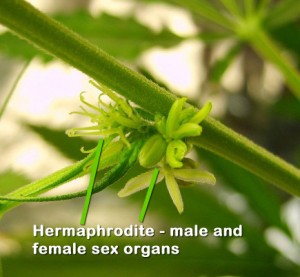 In most cases, hermaphrodite marijuana plants are females that go on to develop male sex organs. This means they will start to flower showing the pear shaped balls and white hairs of a female plant, but will go on to develop the pollen sacks of a male. This can happen any time during flowering when a plant is stressed.

There are no real benefits to keeping a hermaphrodite plant as they pollinate themselves and the female marijuana plants in your grow room. This, coupled with the fact that the marijuana they produce is weak and full of seeds means they are better off destroyed.
Hermaphrodites normally develop in stressful growing conditions. A common cause of hermaphrodite marijuana plants is interrupting the darkness period during flowering . Also, too little or too much heat or supplying an incorrect nutrient mixes also cause the plant stress. Keeping your females happy during flowering will help you to avoid growing a hermaphrodite.

Only keep hermaphrodite plants if only a small part of the plant has become hermaphrodited. It would also be recomeneded to move this plant away from other plants. If only one arm has hermaphrodited the plant can be kept. If the whole plant is hermie then the plant needs to be thrown away.

Can I guarantee that I get the sex that I want?

Many of the reputable seed banks now sell seeds in both “Regular” and “Feminized” types. This means you can buy seeds that have been genetically predisposed to grow as females and eliminated the need for marijuana sexing. Although these do not come with a 100% guarantee, if your plant is grown in the correct stress free conditions, there is a 95% chance you will grow a female weed plant. It should be noted that many feminized marijuana seeds can hermaphrodite.

The best way to guarantee the sex of your marijuana plant is through cloning . A clone will take on 100% of the characteristics of its mother plant, meaning a female mother will produce a female marijuana clone. You can clone just after a plant’s pre-flowers have shown in vegetative growth.

Using the above guide and pictures will help you determine the difference between male or female marijuana and make the marijuana sexing process a breeze.

74 comments on Male or Female