Trimming and training are essential methods of maintaining your plants and maximising their output. Trimming away leaves that hog the light from buds and undergrowth which obstructs airflow will make for a more productive plant. Training is less extreme and simply involves bending and securing the plant to ensure the buds receive maximum exposure to light and air. There is a variety of different techniques to help growers get the most out of their plants. Some of the better known methods we cover include SOG (Sea of Green), SCROG (Screen of Green) and LST (Low Stress training,

Instead of growing larger plants for longer, the Sea of Green technique attempts to grow a larger number of smaller plants, more quickly, thus utilising the growing space and time to maximum effect.

A short guide to Sea of Green 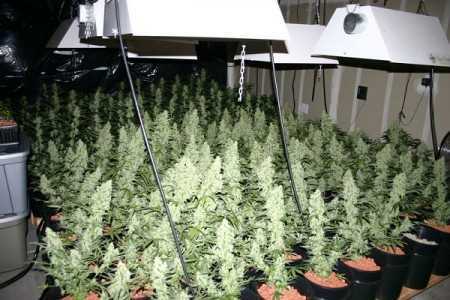 1) Find a suitable mother plant (or plants) from which you will be able to take sustained cuttings indefinitely.
2) Take several cuttings and plant in a separate growing area; amount of cuttings taken will depend on size of mother plant, space available and frequency of harvests desired.
3) Rotate cuttings every 2 weeks, ideally replacing them with others who have reached optimum height.
4) Only the top layer of buds counts, so trim the plant, cutting away lower foliage to facilitate airflow.
5) Harvest plant roughly 8 weeks after it has reached optimum height, replacing all the while with new batches.

The Screen of Green technique is very similar to Sea of Green however it makes use of a screen made of net or wire. This keeps the plants at a desired height allowing them to better control the growing environment and make optimum use of limited space.

A short guide Screen of Green 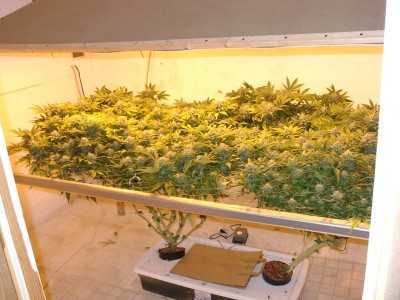 1) Find a suitable screen made of net or wire with large holes.
2) Place screen at suitable distance from soil (this will be determined by strength of lamp and strain of plant).
3) Once plants break the surface of the screen, train them by bending them back under to expose lower layers to light.
4) Trim upper leaves which are obscuring buds and lower foliage to facilitate airflow.
5) Harvest when the strain you are growing has fully completed flowering.

Grow tip: Not all marijuana strains are designed to be grown using SOG or SCROG techniques. Indica and Sativa varieties differ significantly in shape and height, for more info check out our marijuana seeds section.

Regardless of how much sunlight, water and nutrients you provide your plant with, it will still have a limited amount of energy. Therefore, pruning the smaller, lower branches which have fewer buds and receive less light will redirect energy into the larger flowers and create bigger, heavier buds.

1) Wash and disinfect your hands thoroughly; open wounds on a plant are highly vulnerable to contamination. This may have to be repeated several times during the procedure.
2) Choose an appropriate, sterilised tool; scissors, pruners or a razor blade are best.
3) Start by pruning the lower branches that are weaker and thinner than those on top; this will redirect energy into those above.
4) To increase the height of the plan prune the tips of branches – doing this encourages a double growth in place of the pruned tips are will generate more output.
5) Cease all pruning at least a month before harvesting as this will decelerate the flowering process.

LST is a form of training whereby the topmost branch or tip of the plant – to which a plant will always direct most of its energy – is tied down, thus tricking the plant into thinking that its highest point has been removed. It will then send energy into growing new buds and shoots, thus maximising output. 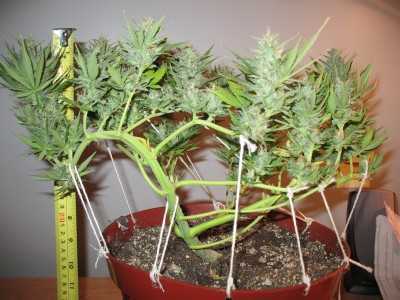 1) Prune the fan leaves from one side of the plant so that they don’t interfere when training.
2) Secure the base of the plant to prevent it being uprooted.
3) Tie the tip of the topmost branch to a point at soil level, taking care not to bend it so drastically that it breaks.
4) Tie down any obstructive fan leaves which restrict light to the rest of the plant.
5) As more shoots are produced, secure each of these to the soil to achieve a canopy of the same height.

FIM is the practice of removing the topmost growing tip of a marijuana plant to encourage it to grow sideways rather than upwards. It is especially useful for those who have limited vertical space or power from their light source. It has the name FIM because of the ease with which growers can cut off more than they intended with the initial severance, which will inhibit growth.

1) Wash hands and sterilise any tools to be used thoroughly.
2) Locate the topmost growing tip – this will be above the topmost node and obscured by the fledgling new fan leaves.
3) Sever the tip using a blade or simply your fingers – take care not to damage the surrounding growth though!
4) The process can be repeated multiple times to achieve several different branches into which most of the plants energy will be concentrated.

Topping a marijuana plant is very similar to FIM, although a little more drastic. Instead of cutting only the topmost growing tip, topping dictates that you cut off entirely the topmost growth, node and all side shoots. This will force the plant to grow two new buds in place of the old one, thus increasing yield.

A short guide to Topping

1) Wash hands and sterilise equipment.
2) Do not top until after 3 or 4 levels of leaves have appeared – any earlier and the plant may not be strong enough to cope with the stress and will become stunted in its growth.
3) Cut off the topmost growth underneath the node and all of its leaves.
4) Remove any leaves which are obstructing the severed area from light.

Super cropping is the method of damaging your plant’s branches deliberately in order that it puts energy into rebuilding the damaged tissue stronger than before. This will lead to a stronger plant which grows faster, can support more weight and produces larger buds. It will also allow you to control the direction of growth by bending and twisting the side shoots in the desired direction.

A short guide to Super Cropping

1) Start super cropping 2 or 3 weeks into the vegetative phase.
2) Take the main stem between your fingers just beneath the top growth shoot and crush gently under you feel the tissue giving way beneath your grip.
3) Bend it over slightly, taking care not to rupture the stalk entirely.
4) Give the plant at least a week to recover, using wire, bamboo or other splints to support it and help its recovery if necessary.
5) Super cropping can be performed multiple times on a plant, both in different areas and in the same ones after they have fully recovered, thus increasing the overall strength and vigour of the plant.

Trimming and training marijuana plants is an essential part of the marijuana growing process. Depending on the conditions you are growing in will dictate whether or not you can use techniques such as Sea of Green, Screen of Green or LST.