Sativa dominant Gorilla Bomb is the offspring of Gorilla Glue #4 and THC Bomb.  Anyone familiar with Gorilla Glue knows that although the official reason for the name was its robustness and the fact that it simply oozes sticky resin, it quickly became known as the strain powerful enough to give a gorilla couchlock.  Crossing it with THC Bomb makes it even more potent for the ultimate in heavy-duty pain relief as well as a superb, cerebral buzz.  As well as a powerful effect, it also has a mighty yield, although growers need to be prepared to give it a decent amount of headroom. 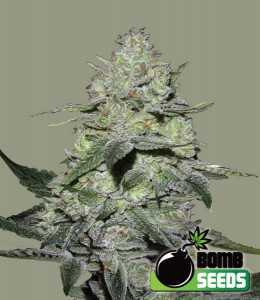 For all its strength, the flavour of Gorilla Bomb is both rich and subtle without being remotely harsh.  This is a strain for people who love chocolate, particularly chocolate infused with sweet and sour flavours.  A diesel underbody cuts through all the sweetness to provide a strong, satisfying body.

In terms of effect, all we can say is that if you thought Gorilla Glue was strong (and believe us it is), then Gorilla Bomb is even stronger.  If you need seriously powerful, fast-acting pain relief, then this could be the strain for you.  If you’re a recreational user looking for the highest possible cerebral high, then this could also be the strain for you, but we really have to emphasize the fact that this variety is strong.  We know we’ve said it repeatedly but this is literally one of the strongest strains on the planet and therefore needs to be treated with great respect.  Beginners should steer well clear of Gorilla Bomb unless they need it for pain relief, in which case they should start with the tiniest of doses.

Gorilla Bomb is generally straightforward to grow, but it does have a voracious appetite for nutrients.  This is reflected in the amount of resin it produces, so you will obviously need to be prepared for that.  The joke about Gorilla Glue was that it has so much resin it would literally glue together trimming scissors.  In all seriousness, if your are planning on plant training, you will need upper-end scissors to cope with the job.

Indoors, Gorilla Bomb will be ready in about 9-10 weeks and outdoors around October.  Yields are a very respectable 400 to 550 gr/m2.