The exact genetics of Euphoria are still rather shrouded in mystery, but it is known to have been bred from skunk strains, including the legendary Skunk #1.  In appearance, effect and growing behaviour it is a balanced hybrid. 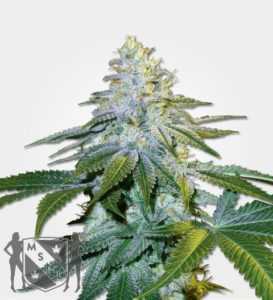 Even though Euphoria is very definitely a skunk strain, it’s less overpoweringly skunk than some of its counterparts.  The base notes are certainly earthy, woody and skunk and there’s a sour edge to it, with citrus and pine freshness too and a hint of spiciness, but there’s also a touch of candy sweetness to take off the edge and stop this strain from becoming too harsh.  The degree of sweetness depends on the curing time, so keep this in mind.  As you would expect from a strain with such a complex flavour profile, the aroma is also rich and satisfying.

Medically speaking, this strain is medium-high in THC (around 15% to 20%) and moderately high in CBD (around 9%).  In spite of the high CBD content, Euphoria, as its name suggests, is very much known as a “head” strain, bringing on a fizzy, cerebral buzz, which is great for blowing away the blues.  As such, it’s generally used for treating emotional disorders and is particularly recommended for dealing with social anxiety.  Having said that, it still offers very effective pain relief and hence could be a good “day-time” choice for that purpose, especially when the pain is related to tension or stress, such as headaches.  The high CBD content keeps the overall feeling of the high relaxed and mellow, but this is still probably the last strain you want to use to treat insomnia.

Euphoria was bred in the Netherlands and as such is a fairly good choice for people growing outdoors in northern climates, as long as you can give it plenty of sunlight and are in a place where the first frosts tend to arrive after the end of September.  Indoors Euphoria responds well to plant training and is a good candidate for sea-of-green growing.  Although we’ve listed the yield as medium, that’s comparing it to every other strain out there, including the likes of Big Bud.  For its size, the yield is very respectable, with 400-500 g/m2 being perfectly feasible.