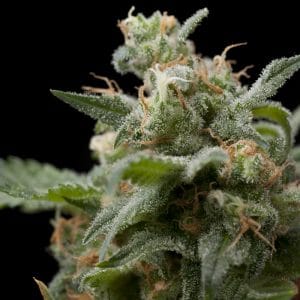 Indica-dominant Auto Super Hash was developed by crossing the original Super Hash with an unknown Ruderalis.  It keeps all the speediness and tastiness of Super Hash, but takes away the need to manage light cycles.

With around 17% THC, Auto Super Hash is strong enough to deliver fast-acting and effective pain relief, together with a mellow and blissful high.  As you would expect from an Indica-dominant, its main attraction is its long-lasting stone. Which is perfect for anyone with a condition which requires deep, physical or mental relaxation.  Auto Super Hash is generally recommended to people looking for a strain to use at night.  It’s especially popular with people who want to make hash, but that’s by no means its only use.  It can also be smoke and vaped, or used for cannabis topicals and edibles.

In addition to being very versatile, Auto Super Hash is also very quick, even by the standards of autoflowering strains. With harvest in just 60-65 days from seed.  More experienced growers could take up to a week of this growing period by using a hydro system.  Auto Super Hash is also very robust thanks to the extensive landrace genetics it inherits from Hash Plant. Which us believed to be a cross between a landrace hash plant and Northern Lights #1. This makes it an excellent choice for beginners, or people who are just short on time.

As you would expect, a strain which is as quick as Auto Super Hash is likely to be on the shorter side.  Indoors, Auto Super Hash can stop growing at a height of just 70 cm to 80 cm. However, it can grow a lot taller outdoors, but is still unlikely to reach any higher than 1.3 m.  Auto Super Hash can produce up to 350g/m2 indoors and up to 40g per plant outdoors, which is very acceptable given its overall characteristics.

When it comes to taste, the clue is in the name, the main flavour is indeed hash, which is grounded by the earthiness you’d expect from a kush.  There is, however, a bit of a surprise in the form of a touch of tropical fruitiness, which is very pleasant.