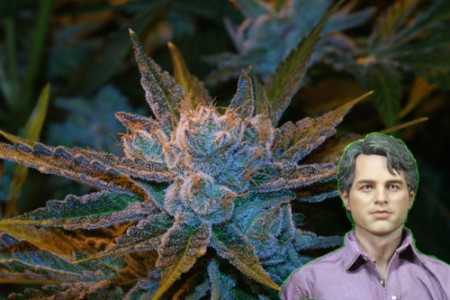 Sativa dominant Bruce Banner is named after the gentle scientist who turns into the Incredible Hulk when roused to anger.  Originally there were 5 sub-strains of this variety, but today the name tends to refer to type number 3, which is a cross between Indica OG Kush and Sativa Strawberry Diesel (which is itself a cross between Sour Diesel and Strawberry Cough).

In terms of flavour, Bruce Banner is potentially best described as a somewhat calmer version of Sour Diesel.  Yes, the diesel base notes are certainly there, but it’s more a case of a strong hint rather than the in-your-face, full-on effect of Sour Diesel.  There an earthy pungency to its middle notes, which again is mild enough to stay on the right side of overpowering.  The top notes have a floral sweetness to them, which takes the edge of this strain’s undoubted strength.

There are two key points to note about Bruce Banner’s effect. The first is that it seems to vary according to how long the plant was given to mature before harvesting.  Basically the earlier it is harvested, the more the cerebral effect of the Sativa element dominates and the later it is left, the more the Indica element makes itself felt.  In either case, the overall effect is of a cerebral, Sativa buzz followed by a mellow Indica stone.  Medically it’s used for treating a variety of emotional issues as well as migraines and Parkinson’s disease.  The other key point to note is that this strain has a reputation for triggering serious munchies.

Bruce Banner is a fairly undemanding strain for growers, just remember the Sour Diesel genetics.  This plant can make your growing room smell like an oil refinery so it’s strongly recommended to pay a lot of attention to ventilation and to use high-quality filters.  Outdoor growers who want to stay on good terms with their neighbours should make sure that their plants are well-sheltered from prevailing winds, no matter how mild.  On the plus side, the yields on offer tend to be higher than for OG Kush and many of its numerous crosses.