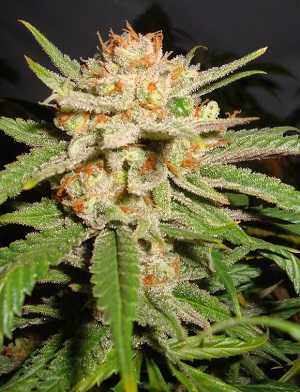 One of the most exciting autoflowers available, the Auto Lemon Haze strain has taken on the best characteristics of its award winning parents, Lemon Skunk, Super Silver Haze and Lowryder. The result is an express version of the of its photoperiod parents and is a superb flavoured weed that is second to none for yields produced by an autoflower.

The fragrance is that of fresh citrus and its lemon fresh flavour is followed by a musky peppery taste with hints of incense. It has become renowned for its intense cerebral and energetic high, which comes on quickly and lasts for a couple of hours. Medically, this it is used to treat poor appetite, anxiety and depression.

It is quite tall for an autoflower, growing to between 70 and 90 centimetres. The plants grow with an open structure with dark green leaves and a dense covering of silvery THC crystals. You can also look forward to hard, dense buds that are completely encased in resin. The THC levels have been measured to be high.

Indoors, the Auto Lemon Haze strain yields exceptional amounts when grown in a hydro set up. However, if you choose to grow in a soil medium, the accentuated flavour more than makes up for a smaller crop. You can maximise its production by making sure it gets lots of light, no less than 20 hours in every 24, and by ensuring the roots are getting plenty of oxygen. It takes a little longer than an average autoflowering strain, but it’s worth it for its yields of 350 grams per square meter.

If you intend to grow it outdoors, it requires a lot of light and high temperatures to maximise its yield potential. However, even if the conditions are not perfect, you’ll still produce first rate weed. Plant the seedling in mid-May for an early August Harvesting.

Anyone who completes an Auto Lemon Haze Review would recommend this weed. Its intense high and its formidable flavour will impress the most seasoned smokers. Combine these traits with its exceptional yields and your looking at a top class weed.