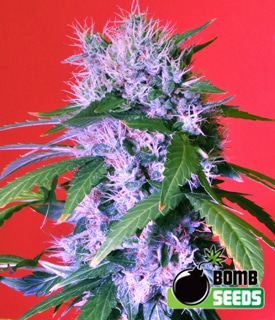 Clever horticulturists created Berry Bomb, an Indica dominant type, by crossing the Blueberry and Bomb #1 strains. Blueberry has won several awards in the High Times Cannabis Cup, including overall first place in 2000. Berry Bomb’s flavor and potency mean it has fans on both sides of the Atlantic.

Berry Bomb weed produces a strong hit but doesn’t have the couchlock qualities of some Indicas and you’ll remain alert and communicative, as well as very stoned. The taste includes sweet, earthy tones mixed with fruit and berry flavors. Many medical dispensaries stock this strain which is good for alleviating insomnia, relieving pain and increasing appetite.

Plants grow to a medium height, 90 to 140 centimetres, and its leaves and buds start off a fresh green before turning to an attractive bluish purple as growth progresses. It’s a bushy plant with a single large cola growing from the centre and heavy buds frosted with crystals. The THC content ranges from 15 to 20 percent.

Its pattern of growth makes it an ideal candidate for growing indoors with the SCROG method. Flowering time comes in at six to eight weeks and harvests tend to be around the 500 to 600 grams per square metre mark.

Berry Bomb seeds will grow taller when left to grow outdoors, and if evening temperatures are lower, the blue and purple colouring becomes even more pronounced.

With its potent hit and distinctively fruity flavor, Berry Bomb is a firm favorite with experienced growers and smokers. It’s also quite easy to grow, so give this one a try even if you’re a beginner,