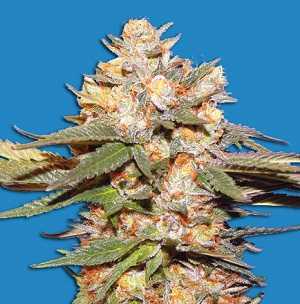 It would appear the idea behind Big Bomb Auto was to create an autoflower that would rival photoperiods for production, but have a much shorter time from start to finish. By crossing their huge yielding Big Bomb with a hand selected ruderalis, they have produced one of the largest yielding autos available to date.

The aroma is much like that of its Big Bomb mother, with a classic skunk smell, while the smoke is also reminiscent of its parentage but sweeter. The high is an all round buzz that is quick to take affect and lasts for a couple of hours. Medically, it’s suitable for treating patients with muscular pain or insomnia.

Big Bomb Auto seeds stay relatively short for such a prolific producer, reaching between 65 and 95 centimtres. The plants grow with a bushy structure, branching out to produce a large number of bud sites. The buds are large, sticky, dense and hard, and put on much of their weight in the last two weeks of flowering. THC levels have been measured at around 15%.

Indoors, its branchy structure makes it ideal for growing in a SCROG set up. Although you can plant it in soil, if you’re looking to maximise yields, they’re better suited to hyrdroponics. Yields are exceptional at 450 to 500 grams per square meter, while taking only 75 to 85 days from seed.

Due to its hardy nature and resistance to mould, it’s possible to grow it outside in cooler northern climates. Outdoor growers can expect an impressive yield at the beginning of June.

In aiming to produce an autoflower that competes with photoperiods on yield and potency, Bomb Seeds have produced something special. This Big Bomb Auto review can recommend it to all types of grower, from beginners to those growing commercially. If you’re sceptical about autoflowers, then this easy to grow, huge yielding fast finisher will make you think again.