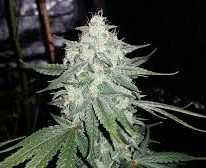 For those who don’t watch South Park, the name is a reference to an animal created by a mad-scientist character called Dr. Alphonse Mephesto after whom the seed bank was named.  The in joke is that whenever people needed something out of the ordinary, they turned to Dr. Mephesto.  It may be fair to say that 4 Assed Monkey is indeed extraordinary, but sadly that doesn’t mean it’s good.

Taste-wise, 4 Assed Monkey is a strain for people who wish it could be Christmas every day, in other words, it’s pine, pine and more pine.  If you’re the kind of person who loves pine and thinks it’s impossible ever to have too much of it, then 4 Assed Monkey may be the strain for you. But we find it rather overpowering and generally we’re big fans of pine flavours.

Genetically, 4 Assed Monkey is a cross between Gorilla Glue #4 and Grape Crinkle and to be perfectly blunt, we’re not sure who thought this was a good idea or why.  Basically, it’s the equivalent of crossing a Formula 1 car with a beaten-up old banger, which is just waiting to fall apart.  Gorilla Glue is an award-winning strain, the genetics of which include classics such as Sour Diesel, Sour Dubb, Chem’s Sister, and Chocolate Diesel.  Grape Crinkle is an autoflowering strain the only plus point of which is that it’s resistant to mould.  Its genetics include Canadian Crinkle Cut, Supernatural and Ripley’s OG Automatic.  THC figures haven’t been released, based on genetics and effect we’d expect them to be in the mid teens.  On the one hand, this is reasonable enough, on the other, if you’re looking for this sort of THC level, you have a huge range of choice. Basically there is much better out there.

As long as you go carefully in the early days with 4 Assed Monkey, it is pretty easy to grow and is certainly reasonably quick.  Yields are acceptable (about 500gr/m2 indoors and 60g/pp outdoors), but that’s a lot more than your neighbours are likely to think about the smell, so if you must grow this strain, you’ll really need to work at odour control.