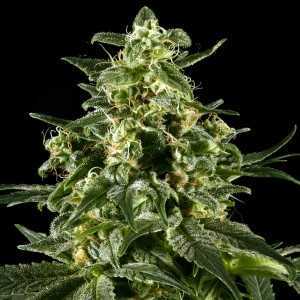 Himalaya Gold (sometimes called Himalayan Gold) is a pure Indica strain with its origins in the high mountains of Nepal and Northern India where cannabis grows wild. Some botanists believe that this Himalayan region is actually where cannabis plants first evolved.

It has a complex flavor and bouquet with hints of chocolate, pepper, spice and coffee. The initial high comes as a powerful body hit which is likely to send you straight to the couch for a lie down. Definitely not a smoke to indulge in if you have important plans for the day, but it’s a great relaxer for chilling out in the evening. This weed can help people who suffer from poor appetite or insomnia and it can also act as an effective painkiller.

Himalaya Gold seeds produce plants that are surprisingly tall for an Indica type. Indoors, the plants, which have many branches, can grow to 1.5 metres, while outdoors they can shoot up to 2.5 metres. The buds are long and quite thin with a dense structure and the THC content is around 15 percent.

Indoors, plants need some trimming to keep it in bounds and it has a flowering time of eight to nine weeks. Its bushy, branching growth habits make it a good candidate for the SCROG cultivation method. You can expect yields of between 450 and 600 grams per square metre.

Its mountain origins mean that this is an unusually hardy plant so growing it outdoors in the cooler climates of Northern Europe is perfectly possible. It’s a fast growing strain and may need support as it matures. Harvest comes around mid- to late September and each plant can produce up to 1.5 kilograms.

To conclude this Himalaya Gold review, smoke this heritage strain and you can justifiably imagine that you’re experiencing the same high as some of the earliest cannabis smokers in history many thousands of years ago. Himalaya Gold is a great choice if you’re looking for a pure Indica hit and a plant that is exceptionally hardy.