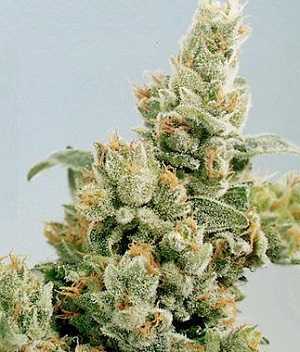 KC 36 is another cannabis variety from KC Brains, the Dutch grower. It’s a combination of two strains, White Widow and another KC Brains creation, KC 606. The origins of KC 606 are something of a mystery, but White Widow is a well-known strain, a crossbreed of a Brazilian Sativa and an Indian Indica. White Widow won the High Times Cannabis Cup in 1995. This strain is specifically aimed at outdoor growers in cooler countries like the UK and the Netherlands.

KC 36 weed has a strong, skunky smell and the taste includes notes of tropical fruit and citrus. This is one of those weeds that has a powerful physical hit and smokers, particularly inexperienced ones, may well find themselves locked to the couch for a period. Medical practitioners recommend this strain for people who find it difficult to relax or have problems with sleeping.

KC 36 seeds produce plants that grow to about 175 centimetres outdoors, with dark green leaves that are notably broad. Plants are multi-branched and irregular while the buds are dense and covered in silvery crystals. Indoors, the plants grow shorter, about 75 centimetres, but have the same irregular growth pattern. THC content is high.

KC 36 is quite hardy and will tolerate periods of rain and cooler weather. Plant it somewhere where it will get as much sun as possible and it will thrive. Outdoor harvest comes in late September and you can expect yields of around 900 grams per plant. Indoors, the plants can be grown in hydro or soil and flowering time is six to eight weeks. Indoor yields are lower than outdoor ones.

If you like the idea of growing outdoors but you live in a region that doesn’t have Mediterranean summers, KC 36 will fit the bill. Its high is powerful but relaxing, and you can expect prolific outdoor harvests.