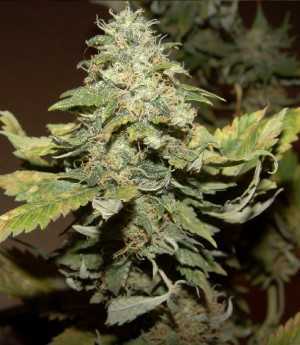 The first Indica dominant Mr Nice seeds were the product of crossbreeding two strains, G13 and Hash Plant. G13 has its own urban myth, that it was created by the US Government, while Hash Plant has its origins in the Hindu Kush, a mountainous region straddling Afghanistan and Pakistan. Neither has as colorful a story as the man that Mr Nice was named after, Howard Marks.

After humble origins in a Welsh pit village, Marks got a degree in nuclear physics from Oxford and then went on to be what the Daily Mail called ‘the most sophisticated drugs baron of all time’, until he was caught and sentenced to 25 years in an American high-security prison. He got out after seven years and now passes his time as a writer, lecturer and campaigner for the legalization of marijuana.

Mr Nice marijuana smells of fresh earth and black hash. The flavor includes notes of sweet spices and fresh fruit. When smoked, the high comes on rapidly as a calming, physical stone that will leave you feeling relaxed rather than wiped out. In medical use, this weed can help with insomnia and muscular pain.

Mr Nice seeds produce plants that are on the short, bushy side with large dark green leaves. The plants have a high bud to leaf ratio and the buds are dense and very sticky. In the lab, THC levels have been measured at as high as 18.4 percent.

Indoors, it thrives with the SOG growing method whether it’s cultivated in soil or hydro and it has a tendency to grow one large central cola. Flowering time is nine to 10 weeks and yields are in the moderate range.

Outdoors, the Mr Nice strain won’t do well anywhere less warm and sunny than the Mediterranean.

Don’t grow this weed if your main aim is to reap prolific harvests. But if you’re looking for a genuine connoisseur’s strain, then you should give Mr Nice seeds a try.