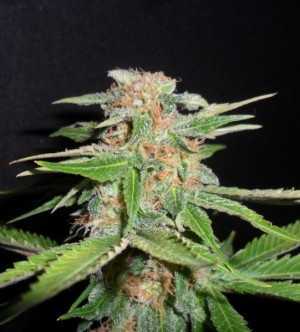 Indica dominant Orange Kush is a hybrid of two strains, Orange Bud and OG Kush. Orange Bud is a popular weed in Amsterdam’s coffeeshops while OG Kush is a Californian creation that’s a byword for powerful weed and has contributed to the genetics of many of the modern skunk strains. Orange Kush bud’s reputation was enhanced back in 1994 when it took second place in the Bio section of the High Times Cannabis Cup.

The Orange Kush strain has a skunky, earthy smell but when you smoke it you’ll taste a strong orange flavor with undertones of spice and sugar. This weed has a powerfully narcotic hit which will leave your body super-relaxed and may lead to a period of couchlock. In medical use, this cannabis can help with insomnia, poor appetite and muscular pain.

The plants grow to between 90 and 120 centimetres indoors, but left to their own devices outdoors they can stretch as tall as three metres. The leaves are light green with long fingers and the buds are fluffy with lots of orange hairs and silvery crystals. THC levels range from 18 to 20 percent.

Indoors, Orange Kush can be cultivated in both soil and hydro growing mediums and it has a good resistance to mildew and pests. Flowering time is from seven to eight weeks and you can expect to harvest between 400 and 450 grams per square metre.

Outdoors, this strain will only thrive in a climate with hot sunny summers, like in the Mediterranean. Harvest time comes in late September or early October in the northern hemisphere and yields are around 500 to 650 grams per plant.

Orange Kush offers decent yields, easy cultivation and a powerful high which makes it a good choice for both novice and experienced growers.