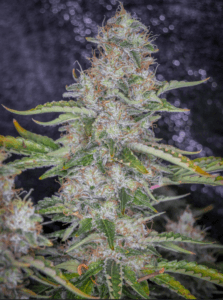 In spite of the Egyptian name, Tutankhamon, by Pyramid Seeds, is based on AK47, which does have fairly exotic-sounding genetics since it is a four-way cross between landrace Sativas from Mexico, South America and Thailand together with classic Indica Afghani, but still does not have any African connections whatsoever.

Tutankhamon has 23% THC which is enough to send pain packing and to provide meaningful relief for conditions such as stress, depression and anxiety as well as boosting your energy levels if you are suffering from fatigue.  Although this strain is Sativa dominant (60%) there is enough in the way of Indica genetics to give you a very relaxing and soothing body buzz without leaving you couch locked.  While this all points to daytime use, for medication which won’t put a brake on your day, Tutankhamon can be used at night without destroying your chances of getting any sleep.

Although the name Tutankhamon may suggest exotic African spiciness, in actual fact the flavour of this strain is light and sweet, full of fruit and florals, there’s a citrus edge to it and a base of skunk pungency.  The fragrance is definitely fruity fresh leaning towards citrus with very little skunk.

Yields are very impressive for the short growing time.  Indoors Tutankhamon needs just 8 weeks of flowering time to deliver up to 600g/m2 of bud and outdoors it will be ready about the end of September or start of October.

Tutankhamon is fairly short for a Sativa dominant strain.  Left to its own devices it typically grows up to 1.5M (indoors) to 2M (outdoors) but it’s so responsive to plant training that you can easily keep its height down to half of that without it impacting noticeably on your crop.  You can also grow Tutankhamon in a greenhouse, which could be useful if you’re in a climate which gets plenty of light but a lot of rain.

Since Tutankhamon is essentially based on landrace genetics, it’s about as robust and hardy as you can possibly get and so could feasibly be grown by totally beginners.  It would certainly be a reasonable choice as a first photoperiod grow.  From a beginner’s perspective, the only potential issue with this strain would be the fact that it is substantially taller than the average autoflowering strains or indeed photoperiod Indicas (or Indica dominants), which means you either need plenty of space or to be prepared to tackle plant training.

Tutankhamon - Pyramid Seeds, 4.3 out of 5 based on 3 ratings