While 9 Pound Hammer is a relative newcomer to the medical marijuana scene, it has some impressive genetics in the form 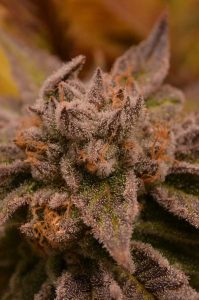 of Jack the Ripper, Hell’s (Angel) OG and Gooberry. As its name suggests, this strain packs a heavy punch, especially as an insomnia treatment.

Although 9 Pound Hammer is 80% Indica dominant, it has a THC range of about 18% to about 23%. It quickly (sometimes immediately) produces an uplifting and stimulating cerebral high, which is more chilled than you would expect from a Sativa with equivalent THC. Its pain-relieving capabilities are, however, exactly the same. 9 Pound Hammer also offers about 0.3% CBD and while that isn’t really a huge amount these days, it’s certainly enough to make you drift into a relaxed, sleepy, tranquillity. As a result this strain is definitely best kept for night-time use and is hugely popular for treating insomnia.

In principle 9 Pound Hammer will grow both indoors and outdoors, but in reality full outdoor growing is probably best left to those in the Mediterranean area. Growers towards the north of Europe might want to try greenhouse growing, to make the most of their sunlight while ensuring that their plants are protected from the elements and anyone north of that should probably treat 9 Pound Hammer as an indoor strain.

Indoors, 9 Pound Hammer will be ready in 7 to 9 weeks, reach a height of about 1.4M and deliver a yield of about 400g/m2. Outdoors it will be ready around the end of September or start of October, grow slightly taller and deliver a yield of about 500g per plant. It’s a pretty strain to grow and can turn purple if exposed to cold, although this is not guaranteed. On a more pragmatic note, 9 Pound Hammer is known for its general robustness and, in particular, for its resistance to mould. If you’re confident with plant training, then trimming away the fan leaves can both improve air flow in the growing room (which will help reduce the threat of a mould attack even further) and help your plants to make the most of the available light.

In terms of taste, 9 Pound Hammer will delight anyone who enjoys fruity flavours, it’s bursting with the sweetness of berries and grapes, but this is counterbalanced by citrus freshness with notes of lime and earth undertones. The aroma is a pleasant blend of the earth and the sweet and the smoke is a lot smoother than you might expect from a strain with such a high level of Afghani genetics.