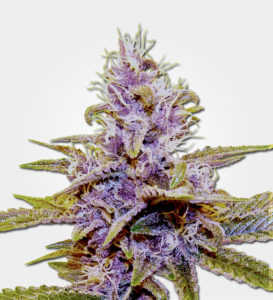 Auto Blue Dream is actually a Sativa dominant.  As its name suggests, it’s a cross between the original Blue Dream and an unidentified Ruderalis.  Blue Dream itself was produced by crossing Blueberry with Super Silver Haze, so basically you are getting a decent level of Haze genetics in a grower-friendly format.

The taste is what you’d expect from the name and genetics.  It’s Blueberry with the freshness and bite of Haze.  The autoflowering version of Blue Dream can have a slight undertaste of new-mown grass, due to the addition of Ruderalis genes, but if you don’t fancy this, just make sure to give your bud a slightly longer cure and it will disappear.  In terms of aroma, Auto Blue Dream is essentially a balance of flowers and fruit, but you can detect the classic Haze pepperiness as a base note.

Although the THC level is on the lower end by today’s standards, coming in at about 10% to 14%, there are probably quite a few people out there who would see this as a plus point in that you get all the “bright and breezy” Haze effect but without taking it to a massive level.  Again, the introduction of the Ruderalis genetics does alter the strain slightly in that it gives it a bit more CBD, hence making for a bit of a stronger stone, having said that, it’s all relative.  In other word’s, you may wind up feeling a bit more chilled and mellow than you would after standard Blue Dream but this is still very much a “wake and bake” strain and better suited to use in the daytime than at night.

Even though Auto Blue Dream is actually about 70% Sativa, the overall genetic balance keeps it on the shorter side and you can expect it to grow to a height of between 60cm (indoor minimum) to 1M (outdoor maximum), so it should fit into today’s smaller grow spaces and beginners shouldn’t need to worry too much about plant training.

Auto Blue Dream can be grown indoors and outdoors.  Indoors it will be ready in about 75 days (seed to bud) and will produce up to 400g/m2.  Outdoors, the grow time will be the same and while it doesn’t have a harvest period as such, you obviously need to think about the weather during your grow time, so planting in July to harvest in September is a good approach.  You can expect up to 400g/per plant.