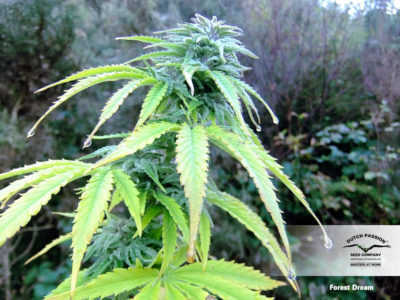 The genetics behind Forest Dream are still a closely-guarded secret, but it is known that this strain is a Sativa dominant, with plenty of THC.  Although a relative new strain, its taste and medical benefits are already winning it plenty of fans.

We wonder if the name Forest Dream is a reference to the pine top notes in the flavour.  These are accompanied by lemon, new-mown grass and complex spices.  The aroma is as mouth-watering as you would expect from this description, but it is very far from being mouth-annoying.  In fact, Forest Dream has a beautiful, really smooth smoke, which glides down easily without triggering coughing fits.

Even though this is a modern strain, the effects are pretty much what you’d expect from a classic, old-school Sativa.  In addition to the pain relief, it delivers a truly lovely, clear, crisp euphoric head high, which will banish the blues and induce a general feeling of wellbeing and contentment.  This means that Forest Dream is a great strain for dealing with emotional and mental issues, such as stress, anxiety and mild depression and also for alleviating mental fatigue.  It’s a great “wake and bake” strain, which can be used in the daytime without leaving you too spaced out to function, within reason, obviously complex activities such as driving are definitely best avoided.

Forest Dream is a reasonable choice for novice growers, although we’d suggest that complete novices should definitely opt for the feminized version of the seeds to avoid issues with having to sex plants themselves.  Growers also need to be prepared for just how tall these plants can get.  They will easily reach two metres and can go as high as four under optimal conditions.  Supporting that kind of growth means paying close attention to light and water and being able to feed a voracious appetite.  There are a couple of points to remember when dealing with Forest Dream.  The first is that later on in the growing cycle, you may need to provide some physical support to your large plant with its branches full of heavy buds.  The second is that while Forest Dream is generally unfussy, it is susceptible to mould, particularly in the later stages of the flowering period, so you will really need to make sure that you have suitable ventilation and that you keep a very sharp eye on your plants and are ready to take action immediately at the first sign of mould.