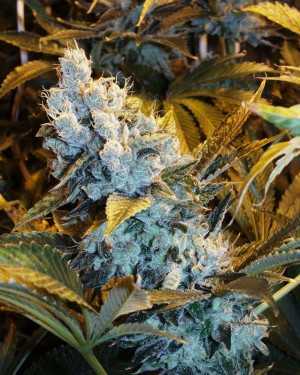 Blue Velvet cannabis has a strong hash smell, reminiscent of an Afghani black, but the taste is rather more subtle with notes of blossom, tropical fruit and spices. The powerful high comes on quickly and you’ll experience a euphoric yet relaxing stone. Medical users turn to this strain for sleeplessness and poor appetite.

Blue Velvet seeds produce plants that grow to over two metres outdoors if allowed to run wild, but controlled in an indoor environment they’ll be more likely to stay around one metre tall. The foliage is a deep green which can turn to a blue, almost purple hue, especially if the plants are grown in cooler temperatures. The dense, longish buds can be close to crimson in colour. THC content is around 18 to 19 percent.

Indoors, Blue Velvet weed responds well to the SOG growing method and flowering time is eight weeks, with yields around the 300 grams per square metre. This is a robust plant that can grow in cooler climates where it can shoot up over two metres with the right conditions. Harvest time is late September to early October and yields can be up to 1,000 grams per plant.

This robust plant is easy to grow, so if you’re a beginner it’s a good choice whether you’re planning to grow inside or out. Experienced growers will appreciate Blue Velvet weed for the decent yields and the potent hit.