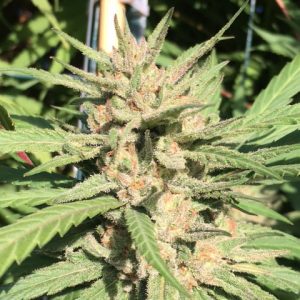 The Candy Apple strain is a 70% Indica cross between Sour Apple and Triple OG.  In addition to tasting like apples, it can deliver enough bud to make you feel like you are holding a bag of apples.

Although Candy Apple is very much Indica dominant, it has an average of 21% THC and about 0.5% CBD.  It delivers fast-acting relief from both physical and mental conditions, without producing the same kind of full-on “energy-blast” high you’d expect from a Sativa.  Instead, the high is more like this feeling of you on your best day in your best mood.  Similarly, the full-body stone which follows is a bit lighter than you would expect from a pure Indica.  That said, however, we’d still recommend keeping Candy Apple for the evening.

Indoors, Candy Apple needs a fairly average 8 weeks of flowering. Outdoor harvest is around the start to the middle of October.  There is a noticeable difference to the height Candy Apple will reach when grown indoors as compared to when grown outdoors.  Indoors, it can stay as short as a metre without any plant training. Although in reality it’s likely to edge closer to 1.5M.  Outdoors, it can easily stretch up to 4 metres if growing conditions are good.  This height difference is reflected in the yields.  Indoors Candy Apple will yield up to 600g/m2, whereas outdoors it can yield 750g per plant or even more.

Although this strain does have good resistance to the likes of mould, diseases and pests, it isn’t particularly tolerate of beginner mistakes. Since the mid-October harvest means that a lot of people will have to grow this strain indoors, the fact that it’s photoperiod won’t help beginners either.  If you do have a bit of experience though, you should be fine with this strain.

While we do like the flavour of Candy Apple, we also think the name is a bit misleading in that it suggests this strain is very sweet.  We’d say that, while it’s definitely more sweet than sour. The flavour consists of fresh, tangy sweetness of apples and citrus (lemon and lime) and also undertones of diesel.  The aroma has a fairly strong diesel base, although here again the fruit brings fresh sweetness to the aroma.