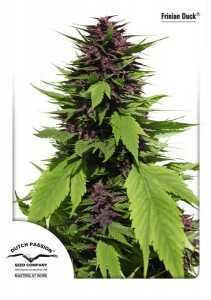 Sativa-dominant Frisian Duck was developed from Frisian Dew (about 50/50 Sativa/Indica) and DucksFoot (mostly Sativa). It’s an unusual strain, which was developed for hardiness both in terms of being able to tolerate colder weather and in terms of being able to forgive poorer growing conditions and/or lack of care. Its main selling point though is that in Veg and early stages of flowering, it doesn’t actually look like cannabis!

In appearance, Frisian Duck has been compared to a Christmas tree and it’s main flavour could easily be thought of as pine, it’s distinctly menthol, there is also a citrus element and an undertone of earthy, spiciness to provide a solid anchor.

The overall effect of Frisian Duck is a bit like walking through a pine forest on a cold winter’s day. It’s refreshing and even exhilarating without being overpowering. This strain will clear your head and leave you ready to get up and go (or to rest without being overwhelmed by an over-active mind) rather than having the powerhouse effect of some other strains. This makes it a great choice for daytime use.

Frisian Duck takes its name from the unusual shape of its leaves, which look like a duck’s footprint rather than being the traditional cannabis shape. As the plant moves to flowering, it can begin to look more like a traditional cannabis strain, particularly at the top. It was designed for outdoor growing and is reasonably tolerant of colder climates. Having said that, the harsher the climate, the more shelter and protection it will need and it does require sufficient sunlight. Left to its own devices, this variety will easily reach 2.5 metres. Indoor growers will need to count on at least 1.5 metres. In either case, this strain’s purple colour can make it look a lot more like an ornamental tree than a cannabis plant.

Frisian Duck was essentially created for quick and decent results for amateur growers. This means that it will flower in about 9 or 10 weeks, with an outdoor harvest around the start of October (in the Northern hemisphere). Yields are only moderate, but then the plants which produce the highest yields tend to take much longer to flower and need much more care and attention.