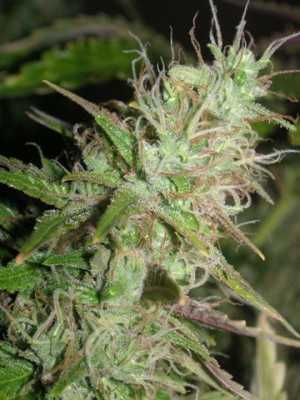 A mythical Greek monster, the Cyclops were giants notable for the fact that they had only one eye, set in the middle of their foreheads. Cyclops weed, a dwarf autoflowering type, is a cross between two strains, Lowryder and AK47, which means it, has genetics from the Sativa, Indica and Ruderalis cannabis types. AK 47 has been a highly successful strain with five awards in the High Times Cannabis Cup over the years. It is the genetics from Lowryder that make Cyclops an autoflowering dwarf.

Cyclops weed has a skunky aroma with pine-forest notes and the flavor includes undertones of fruit and sandalwood. The high balances a strong body stone with vivid mental stimulation and euphoria. Medical practitioners recommend this weed for muscular pain and insomnia.

The Cyclops strain produces bushy plants that grow to a height of no more than 50 centimetres with pale green leaves. The dense buds are on the small side and they’re increasingly covered with silvery crystals as they mature. THC level is around 18 percent, high for an autoflowering type.

Indoors, it’s best to grow this strain in individual pots in a soil medium. As it’s autoflowering, there’s no need to vary the light pattern during the growing period, 20 hours each day will work well. Harvest comes on quickly with just nine weeks between seed planting and harvest. Each plant yields about 50 grams.

Outdoors, it’s perfectly possible to grow the Cyclops strain in northern Europe. Pick the sunniest spot in your garden, preferably with some shelter. Outdoor yields are likely to be a little lower than indoor ones.

Unlike some autoflowering strains, Cyclops weed is at the high end of the potency scale. If you have limited indoor growing space or you want to grow outdoors discreetly, this could well be the strain for you.