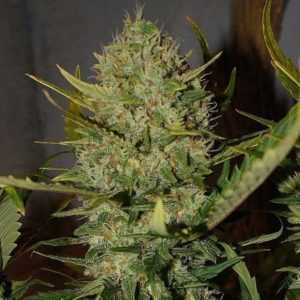 There are several strains called Pineapple Express (or with very similar names), but this version by Fast Buds stands out as it delivers plenty of pineapple taste and ample THC in double-quick time.  Genetically, it is a four-way cross between Skunk, Hawaiian, Trainwreck and Canadian Ruderalis.

With 20% THC Pineapple Express can send pain on the fast track to the door and help to blow the mental blues away, replacing them with a bright and euphoric cerebral high, which is energetic and yet chilled out.  This then mellows into a light and relaxing body buzz which leaves you refreshed and invigorated.  All in all, Pineapple Express is a great daytime strain which can effectively treat pain, fatigue, stress and depression (amongst other conditions) without leaving you too drowsy to function.

Even though Pineapple Express has four strains in its genetic makeup, in terms of taste the only ones which matter are Hawaiian and Trainwreck, which give the glorious pineapple flavour and aroma.  You might pick up some other tropical fruit flavours and hints of citrus, but we doubt very much you’ll notice the skunk.

This version of Pineapple Express is actually autoflowering which means it skips the vegetative stage and so completes its entire growth cycle in just 9 weeks (that’s seed to bud).  Indoors, it can yield up to 500g/m2 and outdoors up to 300g per plant.

Unusually for an autoflowering strain, Pineapple Express is actually a Sativa dominant, which means it’s taller than the average autoflowering variety, although it’s still way more compact than the average Sativa.  Indoors it will generally max out at about 90 cm and even outdoors it’s unlikely to grow beyond about 1.4M.  It’s also nicely responsive to plant training.

Overall there’s a lot to recommend Pineapple Express as a beginner’s strain.  To begin with, the fact that it’s autoflowering, which also means feminized, means that beginners can forget about light cycles and the need to sex plants. Instead you can just focus on the basics of growing.  Pineapple Express also produces very decent yields for an autoflowering strain, which is a plus point for everyone, but especially for beginners on a learning curve, who still need to learn how to maximise their yields.  It’s very robust and hardier than you might expect from the name and tropical taste. In fact it’s actually a very practical choice for outdoor growers in more northern climates, since it is quick enough to finish flowering before the autumn frosts arrive.