Lemon AK by Fast Buds is developed from a specific phoneme of AK47 automatic, which is, of course, based on the ever-popular AK47.  Specifically, it is developed from plants with a high percentage of a terpene called limonene. 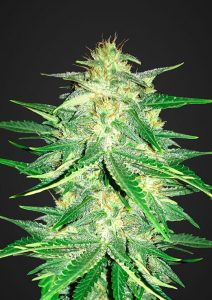 Fast Buds has not released specific figures for the THC content in Lemon AK, simply describing it as high.  Based on genetics (AK47 tends to have between 13% and 20% THC) and effect, we’d suspect around 17% THC.  It certainly has enough to deliver some much-appreciate quick pain relief and a noticeable boost to your mood.  Unusually for an autoflowering strain, Lemon AK is actually Sativa dominant so the high is light, bright and fun, however the Indica genetics help to keep it a bit more chilled than you’d expect from a pure Sativa as does the presence of limonene, which is not just valued for its flavour but also for its relaxing effect.  You’re not going to get anything like an Indica stone, but you are going to get a lovely, warm, mellow feeling.  In short, which Lemon AK is an obvious candidate for daytime use, we’d say it would be feasible to use it at night and still be able to get some sleep.

The fact that Lemon AK is an automatic strain means that growers are freed from the constraints of light cycles and harvest times.  Indoors or outdoors, at any time of year (weather permitting), Lemon AK will be ready to harvest in just 8 to 9 weeks.  For the best taste and yield, it’s advisable to give it the extra week.  It’s nicely compact with a grow range of 0.M to 1M and will yield about 300g/m2 or 300g per plant (indoors/outdoors).  Although this is quite a small yield compared to other strains, it’s actually very impressive for a plant this small.  Another reason Lemon AK is a good choice for beginners is because it is really vigorous and robust, in fact it’s so vigorous, you may well find yourself having to provide it with support from a very early stage.  You will very definitely have to think about odour control as Lemon AK develops a very powerful odour in the latter stages of flowering and no matter how much you like lemons, you may find it rather more than you really want to handle.

In terms of taste and aroma, Lemon AK lives up to its name and delivers a delicious and refreshing citrus experience.