As the name suggests, Zkittlez Auto by Fast Buds is based on the the triple Zkittlez backcross Z3 with the addition of Ruderalis.  The original, photoperiod Zkittlez became so popular so quickly, it was clear from the start that breeders were going to make it a priority to produce 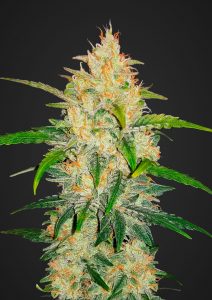 an autoflowering version. We’re happy to say that Zkittlez Auto keeps everything you loved about the original Zkittlez and makes it even easier to grow.

Although Fast Buds has not released any official figures for average THC, we know that the original Zkittlez had a THC range of between 18% and 21%.  Shade that down slightly to account for the addition of Ruderalis and we’d expect a THC level in the region of 15% to 18%.  For many people that will hit the sweet spot of providing enough fast-acting pain-relief and mood-relief. But not sending them so high they’re going to need hours to regain their focus.  What’s more, the fact that Zkittlez Auto is Indica dominant means that the high is less about a massive, euphoric, energy rush and more about blissed out, joyful calmness.  As time passes, the initial head rush will mellow into a warm, comforting body buzz. Interestingly this strain won’t leave you massively couchlocked.  We’d still recommend keeping it for evening though.

Unusually for an autoflowering strain, we’ve classed Zkittlez Auto as being moderately difficult to grow. The reason for this is that this strain has a very big appetite for both nutrients and water. For example, you will get your best yields if you make sure it has plenty of calcium and magnesium from week one (without overdoing it). On the plus side, you don’t have to manage light cycles or harvest times. Indoors or outdoors, Zkittlez Auto will be ready in 8 to 9 weeks (seed to bud). It has a height range of about 0.7M to 1M and can deliver up to 300g/m2 indoors or 300g per plant outdoors. Zkittlez Auto has a somewhat unusual growth structure and so you really have to remember the importance of air flow and, indeed, odour control.

In terms of taste and aroma, Zkittlez Auto is indistinguishable from the original Zkittles. Although it may smell like chocolate in the growing room, once it’s in your mouth (and nostrils), it’s fruity, berry, candy sweetness all the way.