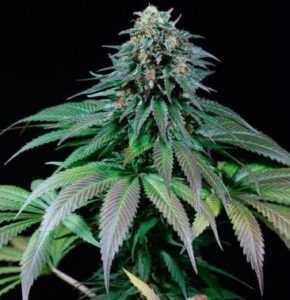 Having said that both strains offer about 21% THC and have similar effects in that they have happy, creative, long-lasting highs along with fast and powerful pain relief.  Even though Purple Moby Dick has a higher level of Indica genetics, it still has minimal CBD, so is much better suited to daytime use than evening use.  This is not really recommended as a recreational strain or for occasional user, although it may be a good option for people who generally need a lower level of pain relief or mood relief, but occasionally need something stronger.

The taste of Purple Moby Dick is fairly similar to the taste of the original Moby Dick, which is to say it has a woody base, with notes of incense and pine but the pine element is a lot stronger and there is now a touch of fruit to enjoy.  The aroma is very much filled with pine, which in itself has a mood-boosting effect (according to aromatherapists).

In principle, you can grow Purple Moby Dick indoors or outdoors, in practice, finding an appropriate grow space may be your biggest challenge (no pun intended).  The reason for this is that Purple Moby Dick combines a fairly lengthy growing time (as in 9 to ten weeks indoors and a mid-\end-October harvest outdoors) with a tendency to what, by modern standards, as fairly massive heights.  Even indoors, this strain can reach up to 3 metres and outdoors it can grow even higher, as much as 3.5 metres, plus it likes to stretch outwards so needs plenty of horizontal space.  In addition to all of this, it needs lots of light throughout its grow and does best in warm, dry climates.  Realistically, therefore, growing outdoors is only likely to be an option for people in the very far south of Europe.

Regardless of whether you’re growing indoors or outdoors, you are going to need to be ready to feed a whale of an appetite and provide plenty of water.  On the plus side, this strain has good resistance to diseases and pests, including mould and if you can keep it happy you can harvest up to 1.5kg per seed.