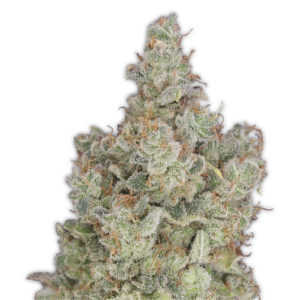 Although the immediate parents of Total Paralysis might not be particularly famous, it’s grandparents are all classic strains.  Total Paralysis is a cross of Moby Dick and Budzilla.  Moby Dick is a cross between a Haze and White Widow while Budzilla is a cross between the legendary G13 and Skunk.  As you might have guessed from that sort of (grand) parentage, Total Paralysis is clearly Sativa dominant (about 70%) so the name has nothing to do with Indica couch lock, instead it’s a reference to the fact that the high will compel your body to stay still so that your mind can focus on the experience.

The taste of Total Paralysis is dominated by berries, but there is also a spiciness to it, with Haze freshness rather than Kush hashiness, although there is the sort of warm, earthy aftertaste you often get from Kush-based strains.  The aroma is all about fruit and spices there may be a touch of earthiness but there’s nothing in the way of skunk pungency.

With an average THC content of 21%, Total Paralysis has built a reputation as an excellent headache strain, in fact it’s an effective treatment for all kinds of chronic pain as well as fatigue and mental conditions such as stress.  It delivers an energizing, euphoric high followed by a warm, light body buzz, which will leave you relaxed and refreshed rather than drowsy.  In other words, this is a superb daytime strain.

We’ve class Total Paralysis as being moderately difficult purely because of the way it stretches during flowering.  Indoors it will grow within a range of 90 cm to 1.8M and outdoors it will grow within a range of 2M to 3M.  In other words, unless you are lucky enough to have plenty of space, indoors or outdoors, you are probably going to need to get to grips with plant training.  This is straightforward and there’s plenty of help and advice on the net, but total beginners may want to start with something more compact.

On the plus side, Total Paralysis is still fairly quick for a Sativa dominant, indoors it will need about 9 weeks of flowering time and outdoors it will be ready around early October.  Indoors you can look forward to up to 550g/m2 and outdoors you can feasibly collect upwards of 700g per plant.  Total Paralysis is particularly rich in oils so if you’re interested in producing wax, then this strain could be a great option.