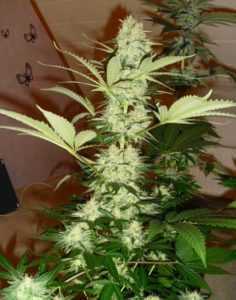 Even though Skunk features to heavily in the genetics of Special Queen #1, you wouldn’t really think it from the taste or aroma.  Certainly the flavour has notes of skunk, but the emphasis is on fruity sweetness.  Similarly, the aroma is juicy-fruit fresh without much skunk in evidence at all.

With 18% THC, Special Queen #1 will regally wave away pain and banish negative thoughts and feelings with its upbeat, refreshing lift.  As the lift gently fades, you’ll find yourself feeling safe, relaxed and comfortable in what is probably best described as a strong body buzz, not quite a full-body stone, which can really eat into your day, but certainly enough to make you take a bit of time out to enjoy it.  As Special Queen #1 is a balanced hybrid, it’s suitable for use at any time, although if you do use it in the daytime remember that you will need a bit longer to come back to reality than you would with a strain which was more Sativa.

Special Queen #1 has an interesting approach to growth, essentially it will typically grow to fit the space available.  Indoors you’ll be looking at a height range of 80 cm to 1.4M, but outdoors it can easily stretch as high as 3M – assuming it has space to do so.  On the plus side, Special Queen #1 has Indica compactness combined with Sativa branchiness, so it’s a good candidate for plant training.  Indoors Special Queen #1 will be ready after just 7 to 8 weeks of flowering and can yield up to 500g/m2 and outdoors you can be looking at as much as 500g per plant.

We’ve classed Special Queen #1 as being moderately difficult to grow purely because of its propensity to grow as much as it possibly can, which means that for many people, plant training is going to be a necessity and while this is straightforward (and there’s plenty of help on the net), total beginners might want to try growing something a big less vigorous first (perhaps AK49 Auto).  Apart from that, Special Queen #1 is a very straightforward strain to grow.