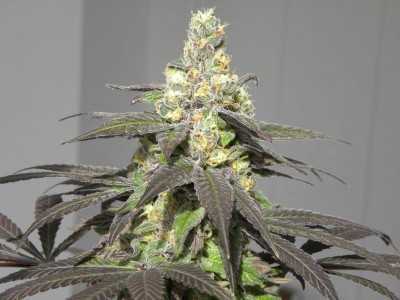 Genetically-speaking, about all that’s known about Purple Urkel is that it’s Purple, it’s Indica (or mostly Indica) and it’s a clone-only strain. The names Grandaddy Purple and Mendocino Purps have both been mentioned as possible ancestors, either or both of which would make sense for a wide number of reasons, including looks, effect and taste but really Purple Urkel’s family history is anybody’s guess. What is known is that this is one of the most effective (and best tasting) migraine and insom

nia cures there is available. It also has a good reputation for dealing with menstrual cramps.

In terms of flavour, Purple Urkel is probably best described as a little bit of skunk and a lot of berry. The skunk pungency is certainly there, but it’s more of a gentle hint of flavour to offset the sweetness of berries, particularly grapes (Grape Ape has also been mentioned as a possible relative). There’s a couple of points to remember before using this strain, particularly for insomnia. First of all, it tends to bring on a major attack of the munchies. Secondly it can make users thirsty and gulping down large quantities of liquid before going to bed could see your beauty sleep being disturbed by a trip to the bathroom. That being so, you might want to put some liquid into a container with a straw, so that you’re pretty much forced to sip slowly and so ease your thirst without filling yourself up on liquid.

Purple Urkel is known for acting quickly, but it generally takes its time to grow. Outside it usually takes the full 5 months to flower, indoors (a better choice) growers are looking at 8 weeks. It’s also worth remember that although Purple Urkel has the relevant purple genetics, how purple it actually gets depends on a variety of factors. Therefore growers who really want purple weed will need to put the effort into getting the conditions just right. Growers who just want a good medical strain, will simply need to pay attention to weed-growing fundamentals. On the plus side, as an Indica, Purple Urkel stays nicely compact, making it a great choice for small spaces.