Developed in the Netherlands, it appears the idea behind creating the Amsterdam Haze strain was to generate a sativa strain that produces exceptional yields of extremely potent buds in an indica like flowering time. The resulting strain is high in THC and low in CBD, and has one of the most exciting and clear headed buzzes around. 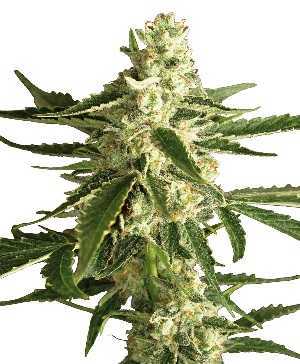 The Amsterdam Haze strain’s aroma has an agreeable combination of haze, mixed with berries and fuel. The smoke has an enjoyable mix of sweet fruit and spices along with hints of fuel and melon. The buzz comes on quickly, is clear headed and long lasting, and won’t have you feeling lethargic. This is great weed to encourage creativity and socializing. Medically, it can be used to treat anxiety, depression, and a loss of appetite.

The plants grow tall, reaching 150 centimetres indoors and an impressive four metres plus outdoors. Its structure is much like that of a Christmas tree, producing plenty of side branching and you can increase your final yield by topping or fimming. The buds are long and dense with a layer of enticing looking crystals coating their surface. THC levels have been measured above 20%.

Indoors, the Amsterdam Haze strain thrives in either hydroponics or soil in a screen of green set up. The flowering times are impressively short for a sativa, with whopping yields of 650 grams per square meter coming in as little as 9 weeks.

Outdoors, it can withstand a cold or mountainous climate due to its resistance to mould. If you plant it in an area that receives lots of light and heat, you can expect prodigious yields of an incredible 1kg+ per plant as early as the middle of October.

This strain is a huge producing and fast finishing sativa with a clear headed and long lasting high that will impress the most ardent of smokers. Its mould resistance and ease of growth is suitable for beginners while its exceptional yields will impress commercial growers. If you’re looking to try a sativa, then this Amsterdam Haze review strongly recommends you go with this strain.