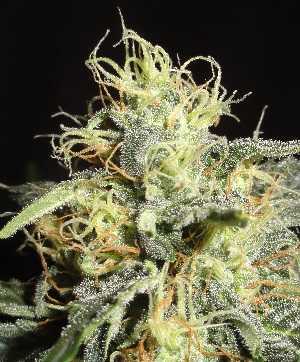 Developed in the Netherlands, Auto Cheese is a cross between the infamous Cheese strain and a hand selected Mexican ruderalis. The Cheese, one of the only strains to originate from the UK, took second prize in the indica section of the High Times Cannabis Cup in 2008 and has lost none of its award winning potency from the addition of ruderalis.

The fragrance of the weed is dominated by the instantly recognisable smell of cheese, and the flavour when smoked is reminiscent of a cheddar, featuring fruity and musty undertones. The hit comes on fast and hard, leaving you couchlocked for a couple of hours, so make sure you have any chores out of the way before you smoke this strain. Due to its high CBD levels, medicinally, this strain is recommended for stress and muscular pain.

Auto Cheese seeds grow into plants that are diminutive in height and bushy in appearance, ranging between 30cm and 60cm. Although the plants stay short and manageable, the smell when flowering is extremely pungent, so it’s not ideal if odour control and stealth are a factor. As can be expected, the buds grow impressively large for an autoflowering weed strain. THC levels for this strain have been measured as high.

Indoors, the plants do well in either a soil or hydro set up, and thrives if you decide to use the SOG method. Like most autoflowering strains, it doesn’t require a separate light cycle. Make the most out of your Auto Cheese grow by keeping your plants on the 20/4 light regime.

Outdoors, plant your seeds straight after the last frosts and you will be able to harvest as early as May. Due to the robust nature of its parents, it will also thrive when grown in cooler northern climes as long as it receives plenty of daylight.

Auto Cheese seeds are a must for any grower who likes the original cheese, but for whom space and time are an important factor. Its robust nature also makes it an ideal candidate for growers who lack experience or are looking for an Auto strain with high levels of CBD.