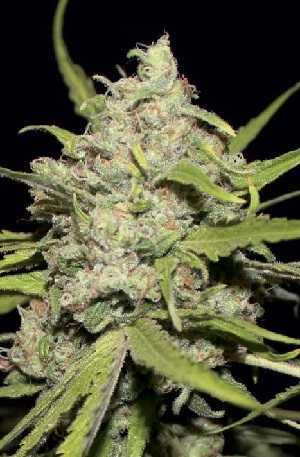 Developed in the Netherlands, Big Bud Automatic was created by crossing the award winning Big Bud and an unknown ruderalis in order to produce a one of the largest yielding autoflowering strains available. Big Bud came to prominence when it won second prize in the Indica section of the High Times Cannabis Cup in 1989 and is known for it huge yielding potential.

The weed has a pungent skunky smell with tones of musky earth, while its flavour is sweet, fruity, and skunky. Like its photo period parent, this weed gives an intense and long lasting full body stone that leads to prolonged periods of couchlock, so make sure you have nothing planned before you sit down to a joint. Medically, this plant can be recommended for muscular pain and insomnia.

Big Bud Automatic seeds grow relatively tall for an auto, reaching heights between 60 and 95 centimetres. The plants develop bushy and squat, with the buds growing tight and compact. THC levels have been measured to be in the medium range.

Indoors, Big Bud Automatic seeds respond well if grown in a SCROG set up. Results are great in soil and it really thrives when grown in hydroponics on a 20/4 lighting regime. Seed to harvest takes between 9-11 weeks and indoor yields can be as high as 400gm grams per square meter.

Outdoors, growing is possible in cooler northern climates due to the introduction of ruderalis genetics and the hardy weed strain is also resistant to pests and diseases. Harvest can come as early as the middle of June if you plant straight after the risk of frost has passed.

This Big Bud Automatic review recommends this strain despite the fact it isn’t the most potent weed strain available. That’s because this hardy autoflowering strain is easy to grow and produces exceptional yields in an incredibly short time, making it a must try for both beginner and commercial grower.