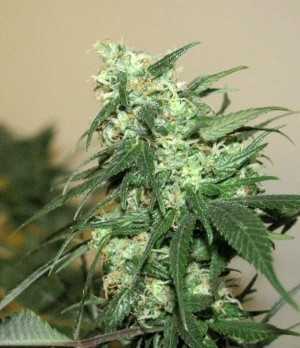 High in THC, the Black Domina strain gives a fast and heavy high that will leave you lying on the couch and can tend towards the overpowering, so it’s probably best as an evening hit. The buds have somewhat hash-like smell and the taste can be described as spicy, even peppery, with some berry undertones. Medical dispensaries recommend it to help with nausea, sleeping problems and pain.

This compact plant is short in height, attaining between 100 and 130 centimetres. A fat central cola dominates with a profusion of heavy, dark coloured buds covered in sticky resin. The leaves grow broad and dark green, and the buds darken and harden as they mature. THC levels range from 15 percent and upwards.

Black Domina seeds are best grown indoors where they respond well to a hydro system coupled with the SOG method. Flowering time is seven to eight weeks and growers can expect a harvest of up to 400 grams per square metre. Outdoor growing is not recommended for this strain.

Black Domina is popular with commercial and domestic growers who appreciate its easy indoor cultivation, decent yields and potent effects. It’s even suitable for novices who are making their first foray into growing indoors with lights and hydro.