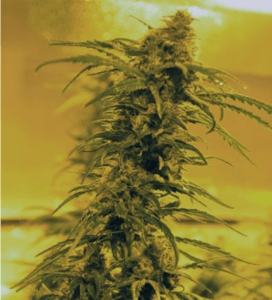 Black Blood is a cross of blue blood and black domina. Blueberry is one of the most popular marijuana flavours around and plenty of seed banks have tried to create the ultimate blueberry-flavoured strain.  Medicann already had a pretty strong contender for this title in the form of Blue Blood, which combined Blueberry (as in the strain) with OG Kush, which delighted lovers of blueberry weed with its combination of Kush earthiness and sweet, fruity blueberry.  They then decided to try to improve matters even further by working to speed up the growth, improve the yield and increase the resin production.  We can see why they did this, many of the most popular modern strains are updated reworkings of old-school classics, but you can’t get it right all the time and sadly, for us, Black Blood Feminized just doesn’t quite hit the target the way that Blue Blood did.

Basically, our major issue with Black Blood Feminized is that in our opinion the taste has been compromised in order to improve productivity.  For the record, we still like the flavour and overall it is still discernibly blueberry, but whereas Blue Blood was clearly and proudly blueberry but with Kush undertones, Black Blood is about 60/40 blueberry and Kush and you really pick up on the spicy, peppery edge.  We think it’s still pleasant enough, but we’re not sure we’d really call this a blueberry strain any more.

The reason for the change in taste is the addition of Black Domina (hence the name), which is a four-way hybrid of Afghani, Ortega, Northern Lights and Hash Plant.  This increases the level of THC to about 18%, which may or may not be a good point, depending on what you want from your weed.  The CBD level is also a fairly hefty 5%.  We’ve heard that this strain has been recommended for multiple sclerosis, nausea, stress and insomnia, which would seem reasonable, we’re just not entirely convinced that this THC/CBD ratio is optimum for either medical or recreational use.

These days, we hardly ever class photoperiod strains, even feminized ones, as easy to grow, mainly because you do need to manage light cycles and also because they tend to require somewhat longer grow times than modern autoflowering strains.  We do, however, think it’s fair to say that Black Blood is about as easy as it gets for a photoperiod strain.  On the other hand, while we’ve often seen this strain advertised as high yielding, we’ve never seen any concrete data on what that means in practice but we do know that Blue Blood was never known for its high yields and Black Domina, which was introduced to increase production, typically only yields about 400gr/m2, which is, in our opinion, medium to low by modern standards.