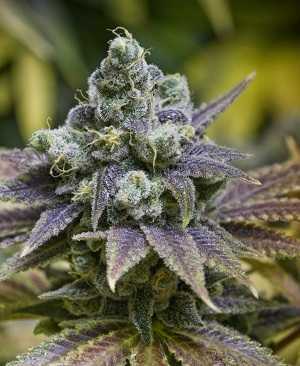 Based in the Pacific Northwest region of America, Blue Grape’s developers created this weed by crossing two strains, Grapefruit and Blueberry. Both the parent strains are well-known to connoisseurs, although Blueberry is the most esteemed since it took top place in the 2000 High Times Cannabis Cup overall rankings, and second place in 2001.

Blue Grape weed has a fairly pungent smell with notes of fruit and hash. The flavour has slightly citric undertones of grapefruit combined with sweeter hints of berries. This weed has a decent hybrid stone; while it has a definite physical hit, it also leaves you clear-headed and mentally stimulated. Medical practitioners recommend it for muscular pain and poor appetite.

The Blue Grape strain produces plants around 1.5 metres tall which have multiple, heavy buds and bushy foliage. The broad leaves are dark green and sometimes display a blue tinge as the plants mature. Buds are covered in a layer of white crystals and THC content ranges from 13 to 17 percent.

You can grow it outdoors if you live somewhere with a climate akin to the Mediterranean. Plants may need support in the later stages and outdoor harvest comes in late September. Indoors, flowering time is about eight weeks and you can expect to harvest around 300 grams per square metre.

If you’re looking for a smoke that gets you high without leaving you couchlocked, this may well be the weed for you. The Blue Grape strain not difficult to grow, so can be recommended for novice growers.