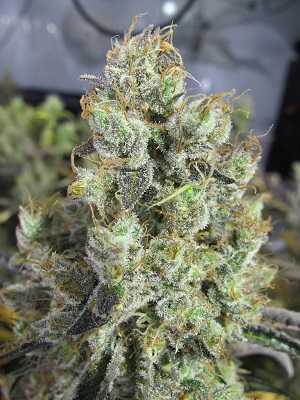 The indica dominant Sour Grape Kush strain is the result of crossing the super potent Sour Kush with the satisfyingly sweet Grapefruit. The highly rated parents have come together to create a one of the most exciting and fragrant weed strains available that will make the most ardent of connoisseurs drool.

Sour Grape Kush weed has an aroma that’s rich with the smells of deep sweet grapefruit and hints of lemon. The smoke is full of sweet grape with a satisfying fuelly, sour twang in the aftertaste, which is incredibly pleasing. The high starts off typically sativa with a euphoric head high that progresses nicely into a classic indica full body stone. Medically, it is recommended for patients who suffer from anxiety, depression, chronic pain and insomnia.

The Sour Grape Kush strain grows short and bushy, producing multiple bud sites and doubling in size once it has started to flower. Resin production starts early and leaves the plants covered in an enticing looking layer of milky trichomes. Its dense and heavy buds will probably need supporting as the plant reaches maturity. THC levels are considered to be very high.

Indoors, Sour Grape Kush weed’s structure is ideal for growing in a SOG set up. Yields can be 25% higher when grown in hydroponics. However, it looses some of its exceptional flavour, which is accentuated when grown in an organic soil mix. Still, expect a decent yield of 400 to 500 grams per square meter.

The Sour Grape Kush strain is disease resistant and can be grown outdoors in cooler northern climates. It’s also an exceptionally fast finisher with a short flowering time of 7 to 9 weeks. Plant after the threat of frost and you’ll be able to harvest as early as the end of September.

This Sour Grape Kush review recommends what can only be described as an exceptional weed strain to connoisseurs. Although yields are just above average, this strain comes with an impressive mouth watering flavour and a knock out buzz.