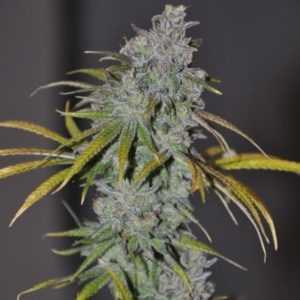 Blue Treacle is one of the latest examples of a strain which has been developed to make it easy and cost-effective for medical users to grow their prescription at home.  Given that this niche of the marijuana market has been really expanding over recent years, Blue Treacle went up against some serious competition and has been more than holding its own

This delicious and effective strain came about as the result of breeding a Blueberry Male and a Sweet Tooth Automatic Female.

Given its parentage, it’ll hardly come as  surprise that this strain is full of berry flavours, particularly blueberries.  This is certainly a weed for people who like it sweet, in fact the taste may well remind users of fruit candies.  At the same time, there is a solid, woody base to keep the flavour grounded.  The aroma is still packed full of berry sweetness, with possibly a hint of florals and still that woody base.  It has to be noted that the aroma of Blue Treacle is quite mild, which may surprise users given how much strength this variety packs, but some people may see this as a benefit.  Finally, just to clear up any confusion, the “Treacle” part of the name refers to the fact that Blue Treacle is known for producing copious quantities of sticky resin, nothing whatsoever to do with the flavour or aroma.

Given that autoflowering strains are known for being less potent than their feminized counterparts, it’s both surprising and impressive that it contains 15%-18% THC, putting it on a par with some quality feminized hybrids.  It’s certainly enough to lift your mood when you feel low without being so strong that you find yourself wishing somebody would give you a map to help you find your way back to earth.  While the high is euphoric and gently uplifting, this is a strain which triggers dreamy and peaceful introspection rather than energetic creativity.  This is part of the reason why users slide so easily into a light but supremely comfortable body stone.  Overall, Blue Treacle is a great, all-round, multi-purpose strain, which can be used at pretty much any time of day.

It’s pretty near impossible to go wrong with growing Blue Treacle.  The seeds are feminized, which eliminates the need to identify the male flowers (preferably before they pollinate the female ones).  They’re also autoflowering, which means you’re freed from the need to control lighting and light cycles.  As well as being compact, Blue Treacle has a really mild odour during the entire growth cycle (vegetation and flowering) so it’s a great choice for when your marijuana-growing needs have to be fitted around the needs and opinions of sharers and neighbours.  Basically if you can manage the essentials of ventilation, food and water for eight weeks, then you can expect up to 450-700 g/sm indoors, which is very respectable for even feminized strains.  The upper end of this range is for people who can manage sea/screen-of-green systems, but even the lower end gives beginners a decent harvest.  Outdoors, you’re looking at 90-150g per plant.