Buzz n Smiles is a beautifully-balanced hybrid, Buzz ‘n’ Smiles is the product of Super Lemon Haze and BigHead #1. 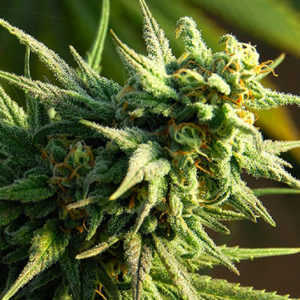 As such it preserves all the stress-relieving and pain-busting goodness of Super Lemon Haze, while the addition of BigHead #1 genetics improves both yield and stability.

Lovers of the original Super Lemon Haze will be pleased to know that the delicious flavour is just as it should be. It’s citrus fresh and full of lemon zest, but it has a sweetness to it. Think lemon tart or lemon curd rather than freshly-squeezed lemon juice. It’s light but still meaningful.

The effect is pretty much in keeping with the flavour. Like its parent, Buzz ‘n’ Smiles offers pain relief which is powerful as well as palatable. Its real medical benefit, however, is helping to deal with emotional issues such as depression and stress. Used recreationally, it boosts energy levels and helps the user to feel more upbeat and lively. Buzz ‘n’ Smiles is a strain which gets to work quickly, generally users feel the effect in their body first, it can literally feel like a weight has been lifted off their shoulders. After this, the uplifting effect travels to the head to set the world to rights, or at least, to make users feel like they can cope with it.

Super Lemon Haze was already pretty reasonable to grow and Buzz ‘n’ Smiles benefits from the BigHead #1 genetics. The only point which might be a challenge for growers is the fact that this strain is on the fragrant side and while lemon is a broadly-popular smell, hence its use in numerous cleaning products, but it can be a bit of a polarizing one, so filters (indoors) or strategic positioning (outdoors) is probably a good idea.

Otherwise, Buzz ‘n’ Smiles is an easy-going, easy-growing strain. Indoors, it will be ready in around 9 weeks and outdoors in late September/early October. Yields are a super-size 500to 700 gr/m2.