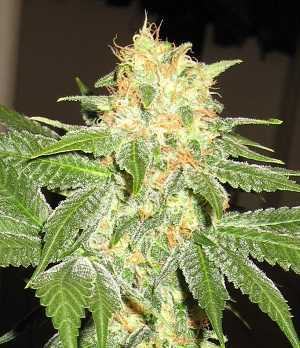 Developed on America’s west coast, the California Indica strain’s parents are California Orange Bud and an Afghani hash-plant. Orange Bud took second place in the bio section of the 1994 High Times Cannabis Cup, and Afghani hash has been used in many of the modern cannabis strains. As its name suggests, the strain is a predominantly Indica type.

California Indica has a pronounced lemon smell with notes of black hash while the flavour is quite mellow with a hint of fresh fruit. This strain is a heavy hitter and can even send you to sleep if you’ve little experience of smoking stronger weed. Medical practitioners recommend it for insomnia and muscular pain.

The plants grow to a height of between 100 and 130 centimetres with mid green leaves. The plants take on a typical indica Christmas tree shape as they grow, with long branches. The large and dense buds become increasingly orange in colour as they mature and THC levels are high.

You’ll get the best yields from this plant by growing it indoors in hydro, and its branching tendency can be tamed by using the SOG cultivation method. The plants can be prone to mould, so it’s best grown in a reasonably dry environment. Flowering time is seven to eight weeks and yields are up to 450 grams per square metre. Outdoors, California Indica will only thrive in a climate at least as warm and sunny as the Mediterranean. Harvest is in mid-October and yields are up to 500 grams per plant.

As any accurate California Indica review will point out, this is a potent weed perhaps best left to experienced smokers. However, it’s not difficult to grow, so it is suitable for novice gardeners.

California Indica Review, 3.4 out of 5 based on 14 ratings