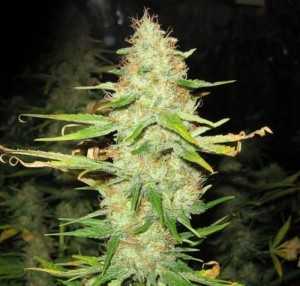 An Indica dominant type, the pleasingly named Caramelicious is the product of a union between three strains; Maple Leaf Indica, Blue Black and Afghan Kush. This weed first came to market just about the end of the 20th century, and it gets its name from its sweet aroma and flavour.

Caramelicious weed has a heavy, sweet scent and the flavor has tones of burnt sugar and sweet spices. The buzz is a predominantly body stone with some elements of a cerebral high. It’s a good weed for relaxing – smoke a little too much and you may even find yourself nodding off. In medical use, it’s recommended for helping with stress and insomnia.

Caramelicious seeds grow into short bushy plants, from 35 to 65 centimetres tall, with large fan shaped leaves which are a dark green. The plants have a generous covering of buds which are very resinous and covered in orange to red hairs. THC content ranges from 17 to 20 percent.

It is an adaptable plant and will produce up to 450 grams per square metre grown indoors using either a hydro or soil medium. Flowering time is eight to nine weeks.

Since Caramelicious is a fairly hardy strain you can grow it outdoors even in countries with cooler, wetter summers. Just make sure you plant it in a spot where it’s sheltered and will get as much sunshine as possible. Outdoor plants should be ready for harvest in late September or early October.

If you’re a novice gardener, Caramelicious is a good choice since it’s easy to grow. Even experienced gardeners will enjoy growing this marijuana because of its good cropping, sweet flavor and potent hit.