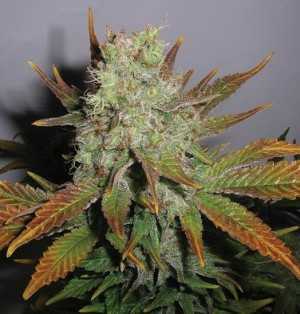 Indica-dominant Romulan weed is named after the Romulans, one of the intelligent alien species that feature in the long-running Star Trek franchise. Some say the marijuana is called Romulan because it is so strong it will alter the shape of your head to be like that of a Romulan (they have prominent ridges on their foreheads). This, of course, is mere fancy. What’s true though is that in 2010 legendary High Times writer Danny Danko named this weed as one of the best ten marijuana strains in Canada, where Romulan retains a lasting popularity.

Romulan marijuana has a pungent bouquet with strong, earthy notes of pine and the flavor has sweet, spicy tones. It’s high THC content, 18 to 22 percent, and its Afghani Indica genetics mean it delivers a powerful body stone with couchlock highly likely after a few tokes. Medicinally, it can help with chronic pain and stress.

Plants are about 100 to 120 centimetres tall and have a bushy growing habit with lots of side stems. The stems have a purplish hue and the plant produces large dark green leaves which take on a bluish tone as the plant matures. The dense buds are light green with orange hairs and a silvery coating of crystals.

Romulan seeds do well indoors or outdoors. Indoor growing will produce medium yields while outdoor growing should produce around 200 to 250 grams of buds per plant with harvest coming in mid-October. Flowering time is 56 to 60 days.

Romulan weed is powerful marijuana and if you’re a fan of the characteristic stone of Indica weeds, you’ll certainly enjoy this weed. Connoisseurs choose it for its distinctive flavor of pine and spices as well as its potency.