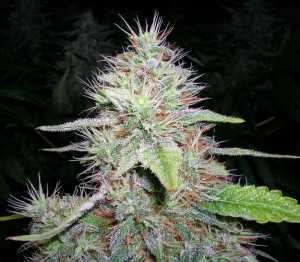 White Rhino weed, is a hybrid strain with Indica dominance. is a mixture of genetic material hailing from Afghanistan, Brazil and India. White Rhino shares much of its genetics with another popular favourite for indoor growers, White Widow. In the 1996 High Times Cannabis Cup, the plant won second prize in the Bio category. Growers choose it for its exceptional potency, ease of cultivation and outstandingly high yields.

The high comes with a pronounced body stone and buzz, and the relaxed, down-tempo feel typical of Indica. Experienced tokers will relish the powerful effects of the White Rhino strain, while less regular users should approach this strain with some care. This weed has a pleasantly sweet smell with citrus and skunk tones, and a smooth, hash flavour with hints of lemon. White Rhino is well-named since its exceptionally high THC levels – up to a staggering 25 percent – mean that the high is akin to the power of a charging rhino. Medicinally, this strain is prized for its ability to relieve chronic pain.

The sweet-smelling plants are short and bushy, and the large, deep green leaves grow on sturdy stems. It produces white, crystal covered buds that are dense and compact.

The hardy White Rhino strain can be grown outdoors anywhere where there is plenty of warm sunshine in the summer. It does well as a single specimen in a container filled with enriched compost and kept damp but not waterlogged. Try giving it a boost with a general plant feed.

Indoors, White Rhino grows to about one metre in the SCROG or SOG systems and taller if cultivated as individual bushes in containers. It starts flowering after eight to 10 weeks. This heavy cropper produces a yield of up to 600 grams per square metre.

White Rhino weed offers a high yield of famously potent weed with pleasingly fruity flavours and one of the most powerful hits around.