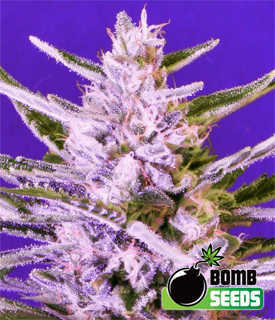 The Ice Bomb strain was created by the renowned breeders at Bomb seeds, becoming a firm favourite with cannabis connoisseurs due to its complex flavour and aroma and its high potency. The weed is an exciting three way mix of Vanilla Kush, White Rhino and the infamous Bomb #1, and gets its name from the heavy coating of ice white THC crystals which form on the buds by harvest time.

Ice Bomb weed has an intense fragrance that encompasses a mix of sweet chocolates and vanilla ice cream with spicy undertones and the smoke is smooth and full of these aromatic notes. The buzz hits you fast and leaves you feeling incredibly relaxed, making this the perfect weed to smoke in the evening. Medically, it is known to be good in assisting with depression, anxiety, chronic pain and insomnia.

Ice Bomb seeds grow to a medium height ranging between 90 and 140 centimetres. It tends to extend outwards into a bushy plant that grows a large single kola, while still producing heavy yielding side branches. The buds can also take on a purplish hue as it matures. The THC levels are considered high and have been measured around 22%.

Indoors, the Ice Bomb strain does well in both SOG and SCROG setups, flourishing in both a Hydroponic and soil medium, with soil bringing the most out of its exquisite flavour. Its outstanding yields and fast finishing time will interest commercial growers. It has a flowering time of seven to nine weeks and produces yields as high as an exceptional 600 grams per square meter.

Due to the plants robust nature, Ice Bomb seeds can be planted outdoors in harsher northern climates and still turn out exceptional results. Plants will be ready to harvest at the end of September or early October in the Northern hemisphere.

If you’re looking for high yielding and potent genetics with an aroma and flavour that impresses the most ardent of cannabis connoisseurs, then you should try the Ice Bomb strain. Commercial growers should consider this strain for its versatility, durability and its incredible ability to produce an abundant harvest.