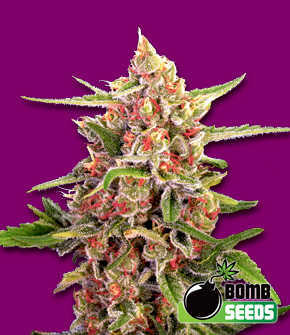 Cherry Bomb weed is the result of crossing the legendary, large yielding Big Bomb with an unknown fruity strain. The outcome is as you’d expect from strain called Cherry Bomb; a great tasting and potent indica dominant weed strain that’s a prolific producer.

The aroma will come as no surprise, sweet fruits with a distinctive cherry note, which is clear on the smoke and sits agreeably on top of skunk undertones. The buzz starts quickly with an initial head high, progressing into a nice calming body stone that’s great for stirring those creative urges and won’t leave you locked to your couch. Medically, use it for treating anxiety, depression, stress and muscular pain.

It grows to a medium height, reaching between 100 and 120 centimetres. The plants have a heavy bud structure with plenty of side branching, which will need supporting when the plants mature. The buds are large and dense with a thick covering of trichomes and, along with the leaves, are known to turn purple as they near harvest. THC levels are measured at around 22%.

Indoors, the strain’s bushy structure makes it ideal for growing in a SCROG set up. While growing in a soil medium will bring out the most of its distinct flavour, it will thrive in hydroponics and produce exceptional yields of 600 to 650 grams per square meter in 8 to 10 weeks of flowering.

Cherry Bomb weed is also well suited to growing outdoors where it can be harvested late September or early October. Cooler temperatures at the end of flowering can increase the pronunciation of the attractive purple and blue hues.

With abundant yielding potential and a flavour that will impress the keenest of smoker, the Cherry Bomb strain is a great choice for both commercial and experienced growers. Its ease of growth and hardiness also means it shouldn’t be overlooked if you’re a beginner grower who likes fine tasting weed.