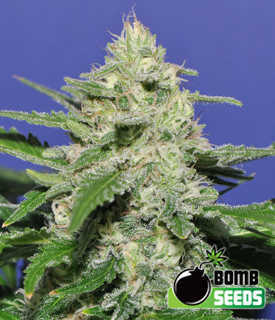 It appears the idea behind creating the Widow Bomb strain was to take an award winning classic, like White Widow, and improve it. By crossing it with the infamous Bomb #1, the renowned breeders at Bomb Seeds have created a strain that maintains all the impact of the original, but with superior strength, yield, and flavour.

The fragrance is sweet and sugary, which comes through in a smoke that is smooth and easy on the back of the throat. The stone is that of an all-body buzz which lifts off with an intense and clear headed rush, progressing into a calm and relaxing stone. The Widow Bomb strain is used medicinally to treat anxiety and depression.

The weed grows to a medium height of between 90 and 140 centimetres, but can reach 2 metres when grown outdoors. The plants grow with a dense bushy structure, producing large and compact buds that are covered in sticky white trichomes that spread down onto the shade leaves. THC levels are very high and consistently measure between 20 and 25 percent.

Indoors, the plant’s bushy structure makes it an ideal candidate for growing in a SCROG setup. It thrives in either hydroponics or soil, with resulting yields and flavour being exceptional in both. If you get the growing conditions right, your plants will yield an incredible 550 grams per square meter.

Outdoors, you’ll want to plant it in an area that receives lots of sunlight to maximize its final crop. The flowering time of 8 to 10 weeks is short for such a potent and large yielding weed strain, and you can expect to harvest at the end of September or beginning of October.

Any Widow Bomb review would strongly recommend this strain. Its vigorous growing habits and mouth watering flavour are topped off by a knock out potency that will leave even the most ardent of smokers spell bound.