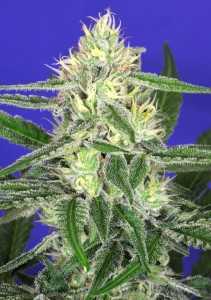 Indica dominant Cheese Bomb is another heavy hitter from the prolific Dutch cannabis scene and a firm favourite in Amsterdam’s coffee shops. To create it, the cultivators crossed two strains, Bomb #1 and Bomb #3, and then bred the resulting plant with the Cheese strain. Cheese is quite unusual in the cannabis hybrid world since it was originally created in the UK. It’s also highly respected, as proven by its second place in the Indica section of the Cannabis Cup in 2008 and third place in the People’s Cup section in 2004.

The Cheese Bomb strain has an earthy, skunky aroma and when you smoke it you’ll notice the cheese flavour, like a mature cheddar, tangy and slightly salty. The stone is quite heavy and physical but not couchlocking – you’ll still feel alert and active, so this is a good weed for socialising and parties. Medically, this cannabis can be used to alleviate muscular pain and to stimulate appetite.

Cheese Bomb weed plants grow to between 90 and 140 centimetres tall depending on the growing regime and the leaves are broad and jungle green. The buds are dense and on the large side, covered with glistening crystals. THC content is in the 10 to 15 percent range.

Indoors, the plants thrive with the SOG method whether you grow them in hydro or soil. Flowering time is six to eight weeks and yields are between 400 to 500 grams per square metre.

Outdoor growing is possible in cooler northern climates as long as you take dare to avoid the risk of frost.

Cheese Bomb has good commercial potential as well as being a favourite with domestic growers. It’s unusual taste, potent high and good yields mark it out as a connoisseur’s choice.