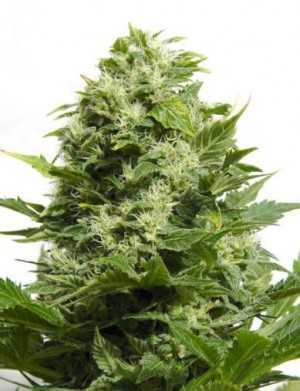 Cheese is a rarity amongst cannabis strains because it was created in Britain in the late 1980s by the Exodus Collective, a band of freewheelers that ran underground dance parties. It’s an Indica and Sativa hybrid, with Indica dominant. Cheese weed took second prize in the Indica section of the Cannabis Cup in 2008, and third place in the People’s Cup section of the competition in 2004. Originally only available as a clone, seeds are now on the market.

When smoked, the weed has an instantly recognizable flavor of cheese, reminiscent of mature cheddar, featuring a fruity scent with musty tones. Cheese weed offers a powerful initial physical and mental hit, including visual effects, with the stone lasting for four hours after smoking. In medical use it can alleviate muscle pain and stress.

The Cheese strain is medium in height with pale green leaves and a robust structure punctuated by many side stems heavy with buds. The compact buds are coated with sticky THC crystals and THC content ranges from 15 to 20 percent.

Grown indoors, Cheese seeds come to flower in around eight to nine weeks, and are well suited to the SOG method with hydroponics. Careful growers achieve high yields of up to 700 grams per square metre.

Outdoor growing is also possible as long as you pick a sunny spot. The plants are harvest-ready in mid-October, producing as much as 800 grams each.

Cheese weed offers an unusual flavor, high yields and a potent stone. Another advantage is its ease of growth, making it a safe bet for the novice as well as the experienced grower.