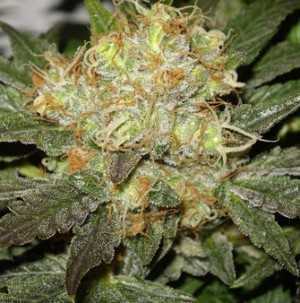 Blue Cheese weed is an Indica created in the Netherlands by crossing the Big Buddha Cheese and Blueberry strains. Both have previously won awards in the High Times Cannabis Cup, as has Blue Cheese, taking 3rd place in the competition’s Indica section in 2006.

Blue Cheese marijuana combines a strong body stone with a stimulating cerebral high, so it’s a good daytime smoke as despite the body stone, it doesn’t induce couchlock. The flavor has musty, almost moldy notes reminiscent of a mature cheese, combined with fruit and berry undertones. In medical use, Blue Cheese can help with relaxation and it’s also a good appetite stimulant.

The plant is on the short side, growing to around one metre tall, and it has a bushy appearance. The buds are heavy and resinous, taking on a purplish hue as they mature. THC content is around the 15 percent mark.

Blue Cheese seeds produce plants that are ideal for growing indoors with the SOG method. Flowering time is nine to 10 weeks, and careful growers can expect to harvest up to 500 grams per square metre.

Blue Cheese grows outdoors as long as it gets enough sunshine, with harvest time coming towards the end of October in the Northern Hemisphere.

The subtle flavor of Blue Cheese weed makes this a popular choice with connoisseurs. Although it delivers a potent hit, it will leave you in an upbeat mood with plenty of energy.