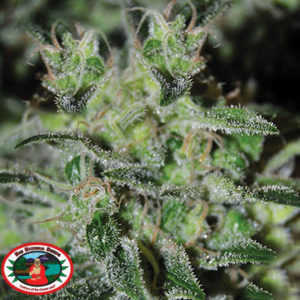 Cheese lovers rejoice, now you can have not just cheese but Double Cheese. As its name suggests, Double Cheese is a cross between two great cheese strains, Blue Cheese and Big Buddha’s own version of UK Cheese. It’s a compact, little Indica dominant with a lot to offer.

You may be thinking that the name tells you all you need to know about the taste, but not quite. What you really need to know is that Blue Cheese is itself a cross between Blueberry and UK Cheese, which means that even though there is plenty of cheesiness, there’s also a decent element of blueberry crispness and sweetness to counterbalance this. The aroma is more in line with what you’d expect from a strain with a name like Double Cheese, it’s much more full-on cheese and much less fruity.

With 18% THC, Double Cheese can quickly cut through both physical pain and fatigue and mental negativity. The initial lift gently transitions into the classic Indica stone, which provides soothing comfort for the mind and warm, relaxation for the body. Overall, Double Cheese is best used in the evening, but it wouldn’t be out of the question to use it in the daytime, as long as you allowed yourself enough time to come out of the stone.

Cheese strains are known for being compact and while Double Cheese isn’t half the size of UK Cheese it’s still nicely short, coming in at about 1M regardless of whether you grow it indoors or outdoors. The indoor flowering time is about 8 to 10 weeks with an expected harvest of about 450g/m2 and outdoors, you’ll harvest around late September or early October and collect about 450g per plant.

Even though Double Cheese can be grown indoors, it’s almost tailor made for outdoor growing, especially in more questionable climates since a significant chunk of its genetics come from UK Cheese, a strain which was bred to cope with the UK’s weather, where even the summers frequently see heavy downpours.

For similar reasons, Double Cheese is great for a beginner’s first grow or for people who are restricted in how much effort they can put in to growing plants (or anything else), perhaps for medical reasons, or just because of lack of time. Its genetics are about as robust as you can get for anything other than a pure landrace strain. As long as you cover basic ventilation and hygiene, it’s very hard to go wrong with Double Cheese.